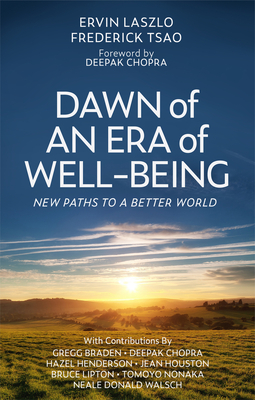 Dawn of an Era of Wellbeing

New Paths to a Better World

Humankind is facing monumental challenges—the sustainability of our natural resources, climate change, wealth inequalities, breakdowns in social structures, the impact of artificial intelligence, and of course the threat of pandemics. What we need to understand is that with each of these challenges is an opportunity to create a better future for our Earth. But first we need to open our eyes and understand how the old “normal”—the conventions and assumptions about how our systems work—are no longer sustainable. Change is going to occur, and a “new normal” is not simply necessary; it is imminent. The authors of Dawn of An Era of Well-Being offer a unique worldview called the “quantum paradigm” that is emerging in society. Their concepts and principles are drawn from theories of Western science and Eastern wisdom traditions of human spirituality. These compass points for navigating the uncharted waters we are entering will be of interest to all who want to find a path to a better world. In this critical work authors Ervin Laszlo and Frederick Tsao are joined by several contributors including Deepak Chopra, Jean Houston, Neale Donald Walsch, and other well-known thought leaders.

Praise For Dawn of an Era of Wellbeing: New Paths to a Better World…

“In this book, authors Ervin Laszlo and Frederick Tsao solve many mysteries and shed light on the path we can take toward a better world. But even more than this, they point to the path for shifting to a new paradigm of consciousness so that our ailing planet can be healed—because without this leap in consciousness, it won’t happen.” —Deepak Chopra

Ervin László is a Hungarian philosopher of science, systems theorist, integral theorist (and originally a concert pianist) who has published about 75 books and over 400 papers. An advocate of the theory of quantum consciousness, Laszlo has a PhD from the Sorbonne and is the recipient of four honorary PhD’s (from the United States, Canada, Finland, and Hungary). His many awards and distinctions include the Peace Prize of Japan, the Goi Award (Tokyo 2002), the International Mandir of Peace Prize (Assisi 2005), and nomination for the Nobel Peace Prize (2004 and 2005). Deepak Chopra™ MD, FACP, founder of The Chopra Foundation, a non-profit entity for research on well-being and humanitarianism, and Chopra Global, a modern-day health company at the intersection of science and spirituality, is a world-renowned pioneer in integrative medicine and personal transformation. Frederick Tsao is the fourth-generation leader of IMC Pan Asia Alliance Group, born in the East and educated in the West. He became chairman in 1995 and transformed the family business from a traditional shipping company to a multinational conglomerate. Fred has published over 30 books in Chinese, concluding that we are amidst a major consciousness shift and at the dawn of a new era. He advocates that business should transform and reform our era. For this, he founded OCTAVE Institute, a comprehensive integrated life journey approach towards well-being.
Loading...
or support indie stores by buying on