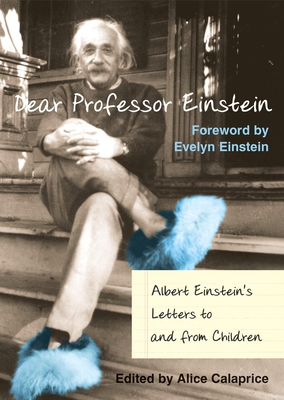 Albert Einstein's Letters to and from Children

This enchanting book displays a small sampling of the amusing, touching, and sometimes precocious letters sent to Albert Einstein by children from around the world, and his often witty and very considerate responses. Alice Calaprice has compiled a delightful and charming collection of more than 60 letters, most never published before, from children to perhaps the greatest scientist of all time. Enhancing this correspondence are numerous photographs showing Einstein amid children, wearing an Indian headdress, carrying a puppet of himself, donning furry slippers, among many other wonderful pictures. They reveal the intimate human side of the great public persona, a man who, though he spent his days contemplating the impersonal abstractions of mathematics and physics, was very fond of children and enjoyed being in their company.

Obviously, Einstein led a busy life, and so he could not answer every letter sent to him. Nonetheless, he made time to respond to those that touched him in some way. To Monique from New York, who asked about the age of the Earth and when it will come to an end, he patiently responded that it is a little more than a billion years old, and, "As for the question of the end of it I advise: Wait and see!" To "six little scientists" from Morgan City, Louisiana, who despite the skepticism of their classmates maintained that life would survive even if the sun burned out, he wrote, "The minority is sometimes right—but not in your case."

Complete with a foreword by Einstein's granddaughter Evelyn, a biography and chronology of Einstein's life, and an introduction by Einstein scholar Robert Schulmann on the great scientist's educational philosophy, this wonderful compilation will be welcomed by teachers, parents, and all the young, budding scientists in their lives.

Alice Calaprice is the editor of The Quotable Einstein and The Expanded Quotable Einstein, and the coauthor of An Owl in the House, a science book for young audiences. She was formerly a Senior Editor at Princeton University Press and worked with that press's ongoing series, The Collected Papers of Albert Einstein, for almost 25 years.
Loading...
or support indie stores by buying on
(This book is on backorder)