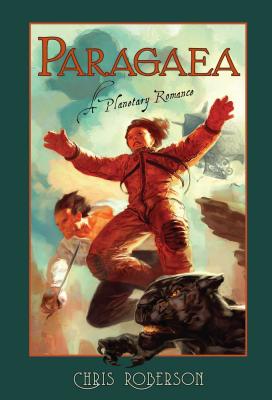 Paragaea: A Planetary Romance is the story of Akilina "Leena" Chirikov, who shortly after launching from Star Town in the Soviet Union, finds herself thrown into another dimension, a world of strange science and ancient mystery. There she meets another time-lost person from Earth, Lieutenant Hieronymus Bonaventure of the Royal Navy—who left home to fight the forces of Napoleon and never returned—and his companion, Balam—outlaw prince of the jaguar men. Bonaventure is interested only in adventure and amusement, while Balam only wants distraction until the day he can reclaim his throne. Having little better to do, they agree to help Chirikov find a way home. In the tradition of the planetary romances of Edgar Rice Burroughs and Leigh Brackett, Paragaea is in fact a "hard" science fiction adventure, grounded in the latest thinking in the fields of theoretical physics, artificial intelligence, genetics, and more. There is a rigorously rational explanation behind all of the unearthly elements, with most of the "magic" the protagonist encounters being the products of a forgotten, transhuman, post-singularity culture that has long since disappeared. Chirikov, a strictly rational Soviet cosmonaut, interprets these as best she can, using the framework of early 1960s science. Being a dutiful Soviet, she wants only to return home to Earth, to inform her superiors about what she has discovered. But she soon finds herself developing ties to her companion Bonaventure that make her wonder whether she really wants to go home at all.

Chris Roberson has been a finalist for the Sidewise Award, the World Fantasy Award, and the John W. Campbell Award for Best New Writer. His story "O One," which appeared in Live without a Net(Roc, 2003), won the 2003 Sidewise Award for Best Short-Form Alternate History. His novels include Here, There & Everywhere (Pyr, 2005), The Voyage of Night Shining White (PS Publishing, 2006), and The Shark Boy and Lava Girl Adventures (Troublemaker Publishing, 2005). Roberson is the editor of the anthology series Adventure (MonkeyBrain) and, along with his wife and partner Allison Baker, he is the publisher of MonkeyBrain Books, an independent press specializing in genre fiction and nonfiction genre studies. Visit him online at www.chrisroberson.net and www.paragaea.com.
Loading...
or
Not Currently Available for Direct Purchase