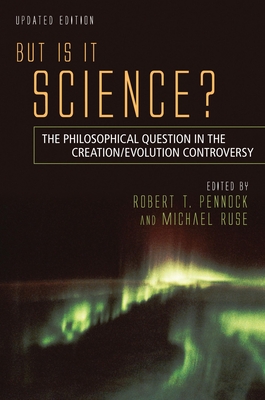 But Is It Science? (Paperback)

The Philosophical Question in the Creation/Evolution Controversy

On December 20, 2005, a U.S. district court in Dover, Pennsylvania, ruled in Kitzmiller et al. v. Dover Area School Board that teaching Intelligent Design in public school biology classes violates the Establishment Clause of the First Amendment to the Constitution of the United States. The judge explained that Intelligent Design is not science and "cannot uncouple itself from its creationist, and thus religious, antecedents." This case was just the latest attempt by proponents of Intelligent Design or Creationism to undermine the teaching of evolution in high school biology classes. The emotionally charged controversy, which has been going on since the publication of Charles Darwin’s Origin of Species, shows no sign of letting up.
This excellent collection, now fully updated, will inform readers about the history of the debate and bring philosophical clarity to the complex arguments on both sides. The editors, both of whom served as expert witnesses in two different court cases, start by chronicling the heated discussion that surrounded the publication of Darwin’s famous work. In the next part, they present articles that explicate modern evolutionary theory, including philosophical critiques by Karl Popper and others. The selections that follow discuss so-called Creation Science, focusing in particular on the 1981 McLean court case in Arkansas. In the final section, the philosophical issues surrounding the distinction between religion and science in the most recent Kitzmiller case are considered. This outstanding overview of an important contemporary debate shows that philosophy has a vital role to play in major decisions affecting education and interpretations of science and religion.

Robert T. Pennock (East Lansing, MI) is a professor at Michigan State University, holding joint positions in the Lyman Briggs School of Science, the department of philosophy and computer science and engineering, and the ecology and evolutionary biology and behavior graduate program. He is the author of Tower of Babel: The Evidence against the New Creationism; the editor of Intelligent Design, Creationism, and Its Critics; and many scholarly articles.

Michael Ruse (Tallahassee, FL) is the Lucyle T. Werkmeister Professor of Philosophy at Florida State University and the author or editor of The Stem Cell Controversy; Cloning: Responsible Science or Technomadness?; Taking Darwin Seriously; Philosophy of Biology; and But Is It Science?, among many other works.
or
Not Currently Available for Direct Purchase
Copyright © 2020 American Booksellers Association