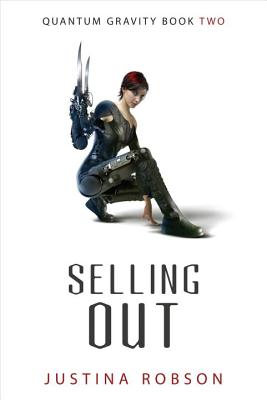 A wonderfully commercial and immensely original SF series from one of its most acclaimed practitioners.

An exciting new direction for the critically lauded Justina Robson.

The first novel of the series, Keeping It Real, was listed in Locus magazine's Recommended Reading: 2006

Book two of the Quantum Gravity series sees Lila Black drawn into the intoxicatingly dangerous demon realm. Capricious, in love with beauty, demons are best left to themselves. This is not easy when they can't resist tampering with humans.

Justina Robson's new series is a joyful melding of science fiction and fantasy brought together in the figure of the dangerously lovely Lila Black, a 21-year-old secret agent who's had much of her body replaced with weapon-and-armor-heavy intelligent metal and who isn't sure where her mind ends and her installed AI begins. Lila's world is one where demons, elves, and elementals live alongside people. And somehow Lila and the other agents of the security agency have to provide security for all and stay alive themselves.

Justina Robson is the author of Keeping It Real, Going Under, and Chasing the Dragon (Books 1, 3, and 4 of the Quantum Gravity series). Her first novel, Silver Screen, published in August 1999 in the UK and in 2005 by Pyr, was short-listed for the Arthur C. Clarke Award and the BSFA Award, and was nominated for the Philip K. Dick award. Her second novel, Mappa Mundi, together with Silver Screen, won the Amazon.co.uk Writer’s Bursary in 2000 and was also short-listed for the Arthur C. Clarke Award in 2001. A third novel, Natural History, a far-future novel, placed second in the 2004 John W. Campbell Award, was short-listed for the Best Novel of 2003 in the British Science Fiction Association Awards, and was also nominated for the 2006 Philip K. Dick Award, receiving a special citation. A fourth novel, Living Next Door to the God of Love, was a finalist for the BSFA Award.
Loading...
or
Not Currently Available for Direct Purchase