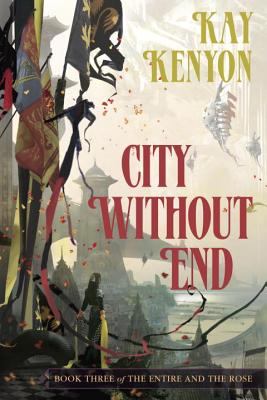 In this series Kay Kenyon has created her most vivid and compelling society yet, the universe Entire. Reviewers have called this "a grand world," "an enormous stage," and "a bravura concept."
On this stage unfolds a mighty struggle for dominance between two universes. Titus Quinn has forged an unstable peace with the Tarig lords. The ruinous capability of the nanotech surge weapon he possesses ensures detente. But it is a sham. In what the godwoman Zhiya calls "a fit of moral goodness," he's thrown the weapon into the space-folding waters of the Nigh. This clears the way for an enemy he could have never foreseen: the people of the Rose. A small cadre led by Helice Maki is determined to take the Entire for itself and leave the earth in ruins. The transform of earth will begin deep in a western desert and will sweep over the lives of ordinary people, entangling Quinn's sister-in-law Caitlin in a deepening and ultimate conspiracy.
In the Entire, Quinn stalks Helice to the fabled Rim City, encircling the heart of the Entire. Here he at last finds his daughter, now called Sen Ni, in the Chalin style. Outside of earth-based time, she has grown to adulthood. He hardly knows her, and finds her the mistress of a remarkable dream-time insurgency against the Tarig lords and more, a woman risen high in the Entire's meritocracy. Quinn needs his daughter's help against the woman who would destroy the earth. But Sen Ni has her own plans and allies, among them a boy-navitar unlike any other pilot of the River Nigh a navitar willing and supremely able to break his vows and bend the world.
Quinn casts his fate with the beautiful and resourceful Ji Anzi who sent on a journey to other realms holds the key to Quinn's heart and his overarching mission. But as he approaches the innermost sanctuary of the Tarig, he is alone. Waiting for him are powerful adversaries, including a lady who both hates and loves him, the high prefect of the dragon court, and Quinn's most implacable enemy, a warrior whose chaotic mind will soon be roused from an eternal slumber.


Praise For City Without End…

"With Bright of the Sky and A World Too Near, Kay Kenyon established herself as one of the most underrated science fiction authors out there… The Entire and the Rose is without a doubt one of the most fascinating scifi series on the market today… [City Without End] is full of surprising twists and turns, and the plot moves forward at a crisp pace… The Entire and the Rose could well be the best game in town right now."
-Pat’s Fantasy Hotlist

"In the third Entire and the Rose novel, the conflict between the Entire’s rulers and those who would save the Rose comes to a head... The series’ fast-paced adventure, solid world building, and fascinating characters wind this volume to a satisfying conclusion and promise lots more intrigue in the next." -Booklist

Kay Kenyon, nominated for the Philip K. Dick and the John W. Campbell awards, began her writing career (in Duluth, Minnesota) as a copywriter for radio and TV. She kept up her interest in writing through careers in marketing and urban planning, and published her first novel, The Seeds of Time, in 1997. She is the author of eight sf/f novels including Bright of the Sky and A World Too Near. Recent short stories appeared in Fast Forward 2 and the Solaris Book of New Science Fiction, Vol. Two. Her work has been translated into French, Russian, and Czech. When not writing, she encourages newcomers to the field through workshops, a writing e-newsletter, and a conference in eastern Washington State, Write on the River, of which she is president. She lives in Wenatchee, WA with her husband. Visit her online at www.kaykenyon.com.
Loading...
or
Not Currently Available for Direct Purchase