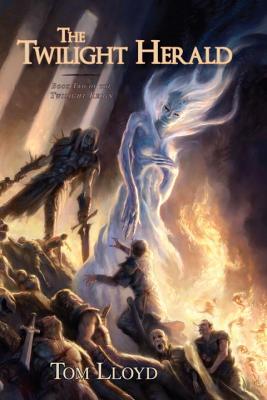 Lord Bahl is dead and the young white-eye, Isak, stands in his place; less than a year after being plucked from obscurity and poverty the charismatic new Lord of the Farlan finds himself unprepared to deal with the attempt on his life that now spells war, and the possibility of rebellion waiting for him at home.

Now the eyes of the land turn to the minor city of Scree, which could soon be obliterated as the new Lord of the Farlan flexes his powers. Scree is suffering under an unnatural summer drought and surrounded by volatile mercenary armies that may be its only salvation.

This is a strange sanctuary for a fugitive abbot to flee to – but he is only the first of many to be drawn there. Kings and princes, lords and monsters, all walk the sun-scorched streets.

As elite soldiers clash after dark and actors perform cruel and subversive plays that work their way into the hearts of the audience, the city begins to tear itself apart – yet even chaos can be scripted.

There is a malevolent will at work in Scree, one that has a lesson for the entire land: nations can be manipulated, prophecies perverted and Gods denied.

Nothing lies beyond the reach of a shadow, and no matter how great a man's power, there some things he cannot be protected from.

Tom Lloyd is the author of four other novels in the Twilight Reign series: The Stormcaller (Book One), The Grave Thief (Book Three), The Ragged Man (Book Four), and The Dusk Watchman (Book Five). He was born in 1979 and spent most of his childhood believing his mother was a witch—a white witch. He followed his degree in politics and international relations with a series of jobs in publishing, and currently works for an independent publisher in London. He lives in South London.
Loading...
or
Not Currently Available for Direct Purchase