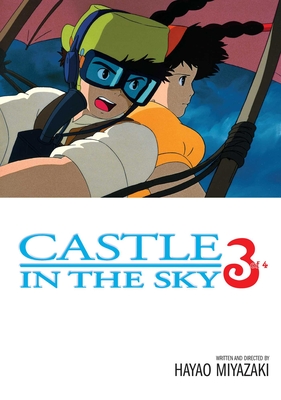 From the creator of the Academy Award-winning Spirited Away, a legend of the days of the first flying machines, where fantastic adventure takes to the air in search of the Castle In The Sky! Pirates greedy for treasure and secret agents hungry for power are both chasing Sheeta, a young girl who wears a mysterious blue stone around her neck. The stone's power makes Sheeta defy gravity?and float down into the life of Pazu, a tough young orphan boy inventor. What ancient secrets link Sheeta's stone to the incredible dangers and mysteries of the Castle In The Sky? Unlike other graphic novels, this series features full-color illustrated stills from the movie printed on quality paper and is published in the original right-to-left format. Together, these four volumes give readers the complete story of the animated feature, and are the perfect gift for fans of the movie and Japanese graphic novels.

Pazu and Sheeta have joined Dola's crew! Helping out in the crow's nest, the engine room, and even the kitchen of the pirate airship Tiger Moth, Sheeta calls upon her childhood memories to plot a course towards Laputa, the legendary floating Castle In The Sky. But they're in a dangerous race with the giant armored zeppelin Goliath, where Muska still has Sheeta's pendant--working as a navigational beacon pointing straight for the Castle! When the two ships cross paths, the evening clouds light up with battle--and Pazu and Sheeta, scouting in a glider, are blown free. The prize everyone is searching for is now very near...but will both sides destroy each other before they can set foot on Laputa?