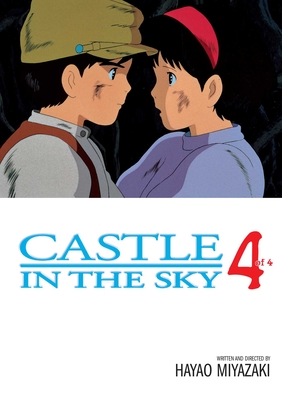 From the creator of the Academy Award-winning Spirited Away, a legend of the days of the first flying machines, where fantastic adventure takes to the air in search of the Castle In The Sky! Pirates greedy for treasure and secret agents hungry for power are both chasing Sheeta, a young girl who wears a mysterious blue stone around her neck. The stone's power makes Sheeta defy gravity?and float down into the life of Pazu, a tough young orphan boy inventor. What ancient secrets link Sheeta's stone to the incredible dangers and mysteries of the Castle In The Sky? Unlike other graphic novels, this series features full-color illustrated stills from the movie printed on quality paper and is published in the original right-to-left format. Together, these four volumes give readers the complete story of the animated feature, and are the perfect gift for fans of the movie and Japanese graphic novels.

The legends were true! Somewhere high in the clouds, human beings have again set foot on the floating island of Laputa, for centuries a peaceful, park-like ruin, tended only by its silent, faithful robots. But just behind Pazu and Sheeta are soldiers from the aerial dreadnought Goliath--who have captured Dola and her pirate crew, and are now looting the gold and jewels of the Castle In The Skyfor themselves! But the man who guided them there, Muska, has his eyes on power, not money--and he alone knows how to activate the Castle's ancient superweapons that could make him master of the world! Can Pazu and Sheeta stop his sinister plan?

Hayao Miyazaki is one of Japan’s most beloved animation directors. In 2005 he was awarded the Venice International Film Festival’s Golden Lion Award for Lifetime Achievement, and his Studio Ghibli received the festival’s Osella Award for overall achievement in 2004. Miyazaki’s films include Spirited Away, winner of the 2002 Academy Award® for Best Animated Feature Film, as well as Castle in the Sky, My Neighbor Totoro, Kiki's Delivery Service, Princess Mononoke, Howl's Moving Castle, and Ponyo, all of which have received great acclaim in the U.S. Miyazaki’s other achievements include the highly regarded manga series Nausicaä of the Valley of the Wind and Starting Point: 1979-1996, a collection of essays, interviews, and memoirs that chronicle his early career and the development of his theories of animation. Both are published in English by VIZ Media.
Loading...
or support indie stores by buying on
(This book is on backorder)