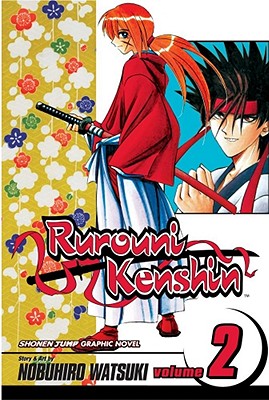 When the chief of the Police Sword Corps himself comes asking for favors, things must be bad. Hitokiri Udô Jin-e--a black-hatted, crazy-eyed slayer who fells both targets and innocent bystanders alike--is steadily working his way through a list of former Ishin Shishi patriots now ensconced within position of power in the Meiji government. Can Kenshin withstand the hypnotic, paralyzing effect of Jin-e...?

Rurouni Kenshin, which has found fans not only in Japan but around the world, first made its appearance in 1992 as an original short story in Weekly Shonen Jump Special. Later rewritten and published as a regular, continuing Jump series in 1994, Rurouni Kenshin ended serialization in 1999 but continued in popularity, as evidenced by the 2000 publication of Yahiko no Sakabatô (Yahiko’s Reversed-Edge Sword) and the 2015 publication of Rurouni Kenshin: Restoration in Weekly Shonen Jump. The series has also inspired novels, anime and films. Watsuki is also the author of the popular series Buso Renkin, published by VIZ Media.
or
Not Currently Available for Direct Purchase