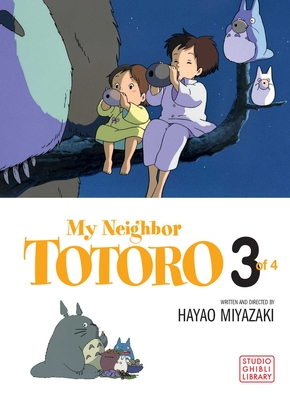 Eleven-year-old Satsuki and her sassy little sister Mei are overjoyed about moving into a historic country house with their dad--but the girls don't realize what a delightful adventure awaits them there. While exploring their sprawling home and the beautiful rural area that surrounds it, Satsuki and Mei meet Granny, a sweet old woman, and her timid grandson Kanta. They also experience firsthand the magic of the Soot Sprites, mysterious creatures that live in the walls, and discover a huge camphor tree that just might be enchanted...

Mei and Satsuki continue to adjust to their new country home, as they begin to make friends with shy neighbor boy Kanta. But life without their mother is hard, especially on the nights that Dad can't come home from work until late!

It's a good thing the girls have the kindly Granny to watch over them. They soon find out that there is another kindly spirit watching over them--Totoro! Totoro shows Mei and Satsuki a strange and mysterious Cat Bus, helps them with their fledgling garden, and then takes them on a wondrous forest adventure!