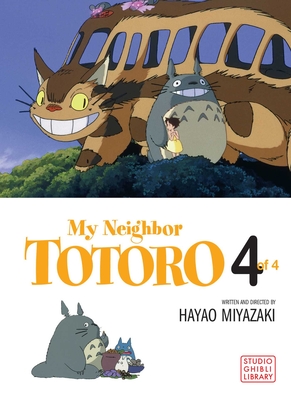 Eleven-year-old Satsuki and her sassy little sister Mei are overjoyed about moving into a historic country house with their dad--but the girls don't realize what a delightful adventure awaits them there. While exploring their sprawling home and the beautiful rural area that surrounds it, Satsuki and Mei meet Granny, a sweet old woman, and her timid grandson Kanta. They also experience firsthand the magic of the Soot Sprites, mysterious creatures that live in the walls, and discover a huge camphor tree that just might be enchanted...

Mei and Satsuki are having a wonderful time working in Granny's vegetable garden while their dad is away at work. But one afternoon there's bad news from the hospital where the girls' mother is recovering. Mei decides to go visit her mother alone...on foot!

When Satsuki realizes her little sister has disappeared, she takes action. But is it too late? Satsuki scours the forest and the countryside, but the search for Mei doesn't look hopeful--until Totoro steps in. With a little help from the forest spirits, including a wild ride in the Cat Bus, the sisters learn the importance of trusting in one another and hoping for the best.