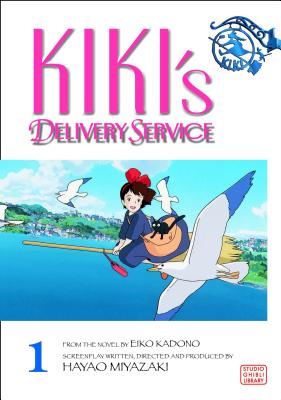 Kiki, a young witch-in-training, has reached the age of 13. According to tradition, all witches of that age must leave home for one year, so that they can learn how to live on their own. Kiki, along with her talking cat Jiji, fly away to live in the seaside town of Korico. After starting her own delivery service (using her broom as the delivery vehicle), Kiki must learn how to deal with her new life, especially after she loses the power to fly.

Hayao Miyazaki is the most beloved animator in Japanese history and the creator of several successful films, including the 2002 Academy Award®-winning SPIRITED AWAY, CASTLE IN THE SKY, PRINCESS MONONOKE (winner of the Japan Academy Award for Best Film release of 1997), MY NEIGHBOR TOTORO and KIKI'S DELIVERY SERVICE. Whether working with comics or animation, Miyazaki's work is known for its entertaining plots, compelling characters, and breathtaking art. He currently works out of Studio Ghibli, where he writes, draws and directs with partner Isao Takahata (GRAVE OF THE FIREFLIES).
or
Buy Here
Copyright © 2020 American Booksellers Association