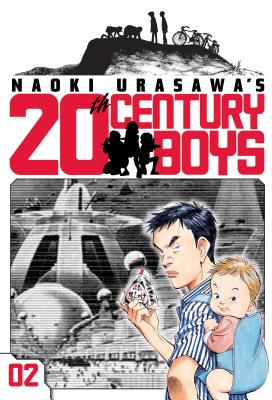 Failed rock musician Kenji's memories of his past come rushing back when one of his childhood friends mysteriously commits suicide. Could this new death be related to the rise of a bizarre new cult that's been implicated in several other murders and disappearances? Determined to dig deeper, Kenji reunites with some of his old buddies in the hope of learning the truth behind it all.

The Friend, an enigmatic cult leader who plans to destroy the world, declares, "The cosmos has begun choosing those who are true friends." Meanwhile, horrifying incidents are taking place: the emergence of a mysterious virus, the death of a detective, the revelations of a man on the run... Kenji tries to find out who this Friend is, but the answer is still far ahead. The footsteps of doom slowly creep closer and a shadow falls over the city...

Naoki Urasawa has been a highly recognized and successful manga artist for more than twenty years. Creator of popular series such as 20TH CENTURY BOYS and YAWARA, Urasawa has been the recipient of numerous prestigious awards including the first Japanese Media Art Festival Manga Award of Excellence, the Osamu Tezuka Culture Award in 1999, and the 46th Shogakukan Manga Award. Naoki Urasawa's Monster has thrilled and entertained well over 25 million readers in Japan.
or support indie stores by buying on