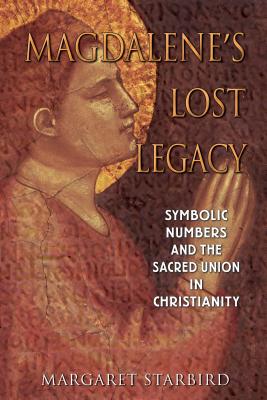 Symbolic Numbers and the Sacred Union in Christianity

In Magdalene’s Lost Legacy, author Margaret Starbird decodes the symbolic numbers embedded in the original Greek phrases of the New Testament--revealing the powerful presence of the feminine divine.

The New Testament contains wide use of gematria, a literary device that allows the sums of certain phrases to produce sacred numbers. Exploring the hidden meanings behind these numbers, Starbird reveals that the union between Jesus and his bride, Mary Magdalene, formed a sacred partnership that was the cornerstone of the earliest Christian community.

Magdalene’s Lost Legacy demonstrates how the crucial teaching of the sacred marriage that unites masculine and feminine principles--the heiros gamos--is the partnership model for life on our planet and the ultimate blueprint for civilization. Starbird’s research challenges the concept that Christ was celibate and establishes Mary Magdalene as the human incarnation of the sacred bride. The author also explains the true meaning of the “666” prophesied in the Book of Revelation. Through this potent reclaiming of the lost legacy of Mary Magdalene, Margaret Starbird offers the opportunity to restore the divine feminine to her rightful role as bride, beloved, and sacred partner.

Roman Catholic scholar Margaret Starbird’s extensive study of history, symbolism, medieval art, mythology, psychology, and the Bible uncovers new and compelling evidence that Jesus Christ was married to Mary Magdalen. Starbird’s investigation of this suppressed history calls for a restoration of the feminine principle to its intended place in the canon of Christianity.

Praise For Magdalene's Lost Legacy: Symbolic Numbers and the Sacred Union in Christianity…

"Through her decoding, Starbird reveals the powerful presence of the feminine divinity in religion where it has been almost erased."
— Network for Women's Spirituality, Sept/Oct/Nov 2003

"Margaret Starbird's work is of particular interest to me because it fuses the diverse fields of symbolism, mythology, art, heraldry, psychology, and gospel history. Her research opens doors for each of us to further explore the rich iconography of our own spiritual history."
— Dan Brown, author of The Da Vinci Code

"Margaret Starbird fearlessly explores the symbols and the hidden clues within the scriptures of the sacred union. . . . Starbird writes eloguently and convincingly, laying the facts before us and allowing us to come to our own conclusions about these wonderful and secret teachings."
— Lesley Crossingham, New Dawn, Jan-Feb 2006
or support indie stores by buying on
(This book is on backorder)
Copyright © 2020 American Booksellers Association