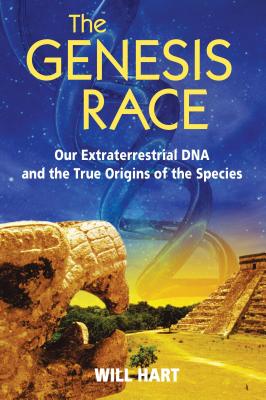 Our Extraterrestrial DNA and the True Origins of the Species

For millennia the development of humanity showed a consistent homogenous pattern. Then suddenly, around 3000 B.C.E., great civilizations sprang up around the globe. All the creation myths of these civilizations tell of gods who came down to Earth and fashioned man in their own image, teaching them the arts of agriculture and civilized life. In addition, the dominant architectural design in Egypt, Sumeria, Peru, Mexico, and China was the pyramid, though science has never been able to explain why or where these peoples obtained the advanced technological knowledge to construct such edifices. The abruptness and similarities of these evolutionary leaps calls into question the Darwinian theory of evolution, given that there are no traces of any intermediate evolutionary forms.

Now, using the most current research on DNA, Will Hart shows that these gods were actually visitors from other worlds who genetically engineered modern humanity from the beings that then inhabited the planet. He also suggests that the Bible and other creation stories have been interpreted falsely as myth when they should have been read as history. The structures left by our ancestors were designed in accordance with precise astronomical and geodetic alignments to make them visible from outer space and to survive for thousands of years with the intent of communicating information relating to physical and temporal events. Humanity’s current stage of development has finally reached the point where the secret messages of these structures can be decoded to reveal the fate of humanity in the coming Earth changes.

Praise For The Genesis Race: Our Extraterrestrial DNA and the True Origins of the Species…

"The myths are not just stories but seem to be much closer to the truth than generally believed."
— Nexus, January 2004, Vol.11 No.1

"To anyone new to the subject, it will be a major revelation. Good solid research without wild speculation . . ."
— W. Ritchie Benedict, New Dawn, October 2004

Will Hart is a writer and photojournalist who has been investigating UFOs and history’s mysteries since 1968. He has appeared on the TV show Ancient Aliens and his work has appeared in Atlantis Rising, New Dawn, UFO, Nexus, Wild West, Sierra Heritage, and Nature Photography. The author of The Genesis Race, he lives in Las Vegas, Nevada.
Loading...
or support indie stores by buying on