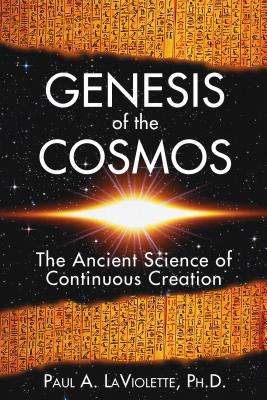 Genesis of the Cosmos (Paperback)

The Ancient Science of Continuous Creation

By Paul A. LaViolette, Ph.D.

Recent developments in theoretical physics, including systems theory and chaos theory, are challenging long-held mechanistic views of the universe. Many thinkers have speculated that the remnants of an ancient science survive today in mythology and esoteric lore, but until now the scientific basis for this belief has remained cloaked in mystery. Paul LaViolette reveals the remarkable parallels between the cutting edge of scientific thought and creation myths from the dawn of civilization. With a scientific sophistication rare among mythologists, LaViolette deciphers the forgotten cosmology of ancient lore in a groundbreaking scientific tour de force. In direct, nontechnical language, he shows how these myths encode a theory of cosmology in which matter is continually growing from seeds of order that emerge spontaneously from the surrounding subquantum chaos.

Exposing the contradictions that bedevil the big bang theory, LaViolette offers both the specialist and the general reader a controversial and highly stimulating critique of prevailing misconceptions about the seldom-questioned superiority of modern science over ancient cosmology. By restoring and reanimating this ancient scientific worldview, Genesis of the Cosmos leads us beyond the restrictive metaphors of modern science and into a new science for the 21st century.

Paul A. LaViolette, Ph.D., is president of the Starburst Foundation, an interdisciplinary research institute, and holds advanced degrees in systems science and physics. The author of Genesis of the Cosmos, Earth Under Fire, Decoding the Message of the Pulsars, Secrets of Antigravity Propulsion, and Subquantum Kinetics, he lives in New York.

Praise For Genesis of the Cosmos: The Ancient Science of Continuous Creation…

“One of the boldest and most exciting hypotheses of cosmology to be put forward in this century. Deserves to be read, reread, reviewed, and researched.”
— Ervin Laszlo, author of The Creative Cosmos

“A dazzling and daring dual hypothesis that the deeper symbolic truths of ancient myths prefigure modern scientific concepts, and that the central insight involves a model of continuous cosmic creation that today’s theoretical physics merely hints at.”
— Willis Harman, former president of the Institute of Noetic Sciences

"A remarkable innovative creative work from one of our most brilliant and original thinkers. Genesis of the Cosmos reads on many levels at once to delight, inform, and surely challenge us."
— Joseph Chilton Pearce, author of The Crack in the Cosmic Egg and The Biology of Transcendence

"As an inveterate synthesizer for an intelligent public, I am always delighted to come across scientific thinkers who go beyond a single discipline--who explore and explain how their model may account for a wide range of phenomena. Paul LaViolette is such a thinker."
— Marilyn Ferguson

". . . a courageous examination of scientific theory and alternative history. . . . a wide-ranging and fascinating intellectual excusion. . ."
— Jeff Carreira, What is Enlightenment

". . . filled with theories and stories and myths and equations that may boggle the mind, so read slowly and carefully, because this isn't New Age stuff. In fact, Genesis of the Cosmos is pure science with a touch of speculative theory, and a creative and original twist of looking back into our past to discover our future."
— Marie D. Jones, Curled up with a Good Book, October 2005

"Both ancient myth and modern physics get the detailed treatment in this creative yet highly technical and strongly researched book."
— Marie D. Jones, Curled up with a Good Book, October 2005