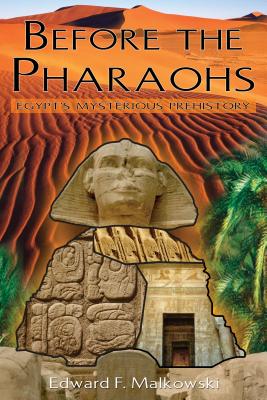 Before the Pharaohs (Paperback)

Presents conclusive evidence that ancient Egypt was originally the remnant of an earlier, highly sophisticated civilization

• Supports earlier speculations based on myth and esoteric sources with scientific proof from the fields of genetics, engineering, and geology

In the late nineteenth century, French explorer Augustus Le Plongeon, after years of research in Mexico’s Yucatán Peninsula, concluded that the Mayan and Egyptian civilizations were related--as remnants of a once greater and highly sophisticated culture. The discoveries of modern researchers over the last two decades now support this once derided speculation with evidence revealing that the Sphinx is thousands of years older than Egyptologists have claimed, that the pyramids were not tombs but geomechanical power plants, and that the megaliths of the Nabta Playa reveal complex astronomical star maps that existed 4,000 years before conventional historians deemed such knowledge possible.

Much of the past support for prehistoric civilization has relied on esoteric traditions and mythic narrative. Using hard scientific evidence from the fields of archaeology, genetics, engineering, and geology, as well as sacred and religious texts, Malkowski shows that these mythic narratives are based on actual events and that a highly sophisticated civilization did once exist prior to those of Egypt and Sumer. Tying its cataclysmic fall to the mysterious disappearance of Cro-Magnon culture, Before the Pharaohs offers a compelling new view of humanity’s past.

Edward F. Malkowski is the author of Ancient Egypt 39,000 BCE, Sons of God--Daughters of Men, Before the Pharaohs, and The Spiritual Technology of Ancient Egypt. He is a historical researcher in Lincoln, Illinois.

Praise For Before the Pharaohs: Egypt's Mysterious Prehistory…

“Ed Malkowski has presented a concise digest of modern research on the early origins of human civilization. His insights regarding the emergence of Cro-Magnon man alone are worth the price of the book!”
— Christopher Dunn, author of The Giza Power Plant: Technologies of Ancient Egypt

". . . a fascinating look at the secrets of the pyramids, the Sphinx, and Egypt in the time before recorded history."
— Dave Roy, Curled Up with a Good Book, May 2006