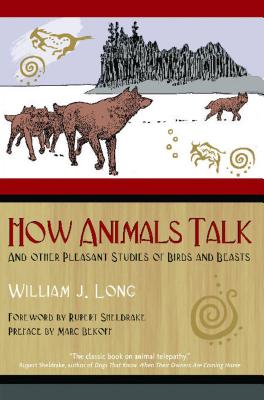 And Other Pleasant Studies of Birds and Beasts

• Based on years of detailed field observations, first published in 1919

• Forewords by biologists Rupert Sheldrake, who has spent 15 years researching the unexplained powers of animals, and Marc Bekoff, the editor of the three-volume Encyclopedia of Animal Behavior

Many sources have commented on the silent communication abilities of pets, but never before and not since the first publication of this book in 1919 has the subject of animal telepathy in the wild been so fully researched. How Animals Talk explores the phenomenon of vocal, silent, and even motionless communication among animals. From crow talk to instant herd communication, author William J. Long theorizes that animals are much more intelligent, emotional, and moral than we have traditionally thought and that their ability to sense the presence of other living beings is an innate ability shared by humans as well. Based on many years of field observations, this classic text contains numerous examples of animal behavior that defy conventional explanation.

Long believed in the importance and validity of anecdotal evidence. He recognized the dangers of conventional research in reducing animals to mere numbers and how the cold third-person prose of scientific study can objectify animals, distancing "us" from "them." His findings on the impact of our presence on animal life--and the cost that we pay in separating ourselves from animals, who help define our place in the natural world--may be more relevant today than ever before.

Praise For How Animals Talk: And Other Pleasant Studies of Birds and Beasts…

"The classic book on animal telepathy."
— Rupert Sheldrake, author of Dogs that Know When Their Owners Are Coming Home

"William Long presages numerous areas that are 'hot topics' in the study of animal behavior and discusses a staggering array of animals. His refreshing and open view of animal behavior shows how much we really do know about animal emotions and consciousnesss when we open our hearts to the amazing and mysterious animal beings with whom we share the Earth."
— Marc Bekoff, editor of the three-volume Encyclopedia of Animal Behavior

"Keen observation, patience curiosity, and detailed descriptions are key to Long's anecdotal evidence about the behavior of various animals; wolves, mink, fox, and several variety of birds. His technique is exactly what has been advocated by field biologists today. Whether or not the reader agrees with him on the subject of animal telepathy, the book is full of insight that rings true for anyone who has lived with or made a study of the animal kingdom."
— Pamela Crossland, TCM Reviews

"In a time when the closest thing to reading natural signals is to correctly anticipate when the light will turn green, Long offers a refreshing visit to the natural world right outside your window."
— Spirit of Change, Winter 2006

". . . demonstrates a Gaian sensibility that will certainly resonate in the hearts and minds of modern pagans. . . . This book is highly recommended."
— Barbara Ardinger, Facing North, Jan 2007

William J. Long (1867-1952) was an American United Church of Christ minister and a well-known naturalist of the early 20th century. He is the author of over 20 books, including School of the Woods, Secrets of the Woods, and Brier-Patch Philosophy.

Rupert Sheldrake is a biologist, a former research fellow of the Royal Society at Cambridge, a current fellow of the Institute of Noetic Sciences near San Francisco, and an academic director and visiting professor at the Graduate Institute in Connecticut. He received his Ph.D. in biochemistry from Cambridge University and was a fellow of Clare College, Cambridge University, where he carried out research on the development of plants and the ageing of cells. He is the author of more than eighty scientific papers and ten books, including Dogs That Know When Their Owners Are Coming Home; Morphic Resonance; The Presence of the Past; Chaos, Creativity, and Cosmic Consciousness; The Rebirth of Nature; and Seven Experiences That Could Change the World. In 2019, Rupert Sheldrake was cited as one of the "100 Most Spiritually Influential Living People in the World" according to Watkins Mind Body Spirit magazine.

Marc Bekoff is Professor Emeritus of Ecology and Evolutionary Biology at the University of Colorado, Boulder, and is a Fellow of the Animal Behavior Society and a former Guggenheim Fellow.
Loading...
or support indie stores by buying on