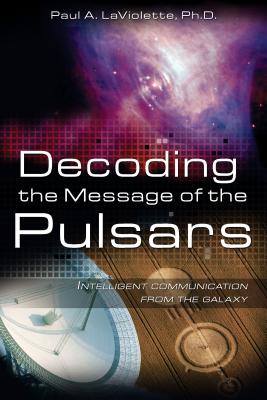 Decoding the Message of the Pulsars

Intelligent Communication from the Galaxy

• Contains extensive analysis of pulsar data, revealing new ideas about the origins and functions of pulsars

In 1967, astronomers began receiving and cataloging precisely timed radio pulses from extraterrestrial sources, which they called pulsars. These pulsars emit laserlike radio beams that penetrate through space much like searchlight beams. Paul LaViolette, who has been researching pulsars for over 25 years, shows that while these pulsars have long been assumed to be spinning stars, the true nature of these radio sources has been grossly misunderstood.

In Decoding the Message of the Pulsars, LaViolette shows that pulsars are distributed in the sky in a nonrandom fashion, often marking key galactic locations, and that their signals are of intelligent origin. Using extensive scientific data to corroborate his theory, he presents evidence of unusual geometric alignments among pulsars and intriguing pulse-period relationships. Equally compelling is the message LaViolette contends is being sent by these extraterrestrial beacons: a warning about a past galactic core explosion disaster that could recur in the near future.

Praise For Decoding the Message of the Pulsars: Intelligent Communication from the Galaxy…

“. . . well worth reading by those who ponder the great questions of life in the cosmos.”
— Eugene F. Mallove, Ph.D., author of Fire from Ice and former director of the New Energy Research Lab

“Paul LaViolette is among the most advanced scientific minds of our time. His contributions in Decoding the Message of the Pulsars on our populated universe lay a foundation for our future society in space.”
— Alfred L. Webre, J.D., author of Exopolitics: Politics, Government, and Law in the Universe

". . . in an age in which few astrologers can actually cast a chart by hand, let alone identify the Zodiacal Signs in the night sky, LaViolette's ability to demonstrate profound scientific knowledge as well as astrological understanding is impressive."
— Institute for Hermetic Studies, May 2006

"[This] book is oveflowing with documented scientific explanations of how supernovae, which have extremely consistent and regular pulses of radio waves, have a high possibility of being of intelligent origin."
— David Paulsen, New Age Retailer, Resource Guide, 2006

"Now be warned, this is a very technical book. About half of it is the evidence proving what he's saying, and honestly I think someone needs to listen to this guy! The other half is more digestible for non-astronomy prone individuals. So buy the book, and just take it slow. His research is footnoted, cataloged and needs to be talked about."
— Olav Phillips, The Anomalies Network, Mar 2008

" . . . reveals a vast body of scientific evidence that will give you a firm foundation for looking further over the horizon of human understanding."
— Rahasya Poe, Lotus Guide, Issue No. 28, Nov/Dec 2008

Paul A. LaViolette, Ph.D., is president of the Starburst Foundation, an interdisciplinary research institute, and holds advanced degrees in systems science and physics. The author of Genesis of the Cosmos, Earth Under Fire, Decoding the Message of the Pulsars, Secrets of Antigravity Propulsion, and Subquantum Kinetics, he lives in New York.
Loading...
or support indie stores by buying on