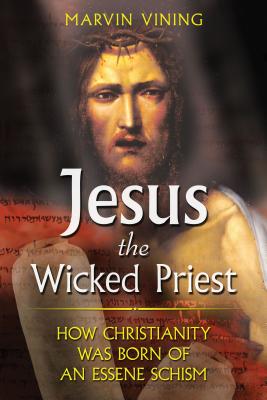 How Christianity Was Born of an Essene Schism

• Reveals the Essenes as key figures behind Jesus’s trial, torture, and crucifixion

• Shows how Jesus, a former Essene himself, was deemed “the Wicked Priest” for his liberationist politics and humanist bent

The Dead Sea Scrolls, discovered in 1947 at Qumran, are generally believed to have been written by a Jewish sect known as the Essenes between 350 BCE and 70 CE--but until now no convincing methodology has linked the Scrolls to the actual life and teachings of Jesus. Marvin Vining builds from the controversial work of Barbara Thiering to demonstrate that the Scrolls do speak directly to the origins of Christianity and even reflect a mirror image of the Gospels from the perspective of Jesus’s enemies.

Christianity arose out of a schism between the exclusivist, rigid, and militant views of the Essenes and the inclusivist, tolerant, and nonviolent views of Jesus. Jesus was raised an Essene, but he refused to follow their orthodoxy. Vining shows that the Dead Sea Scrolls are written in a secret coded language called pesher in which Jesus emerges as the Wicked Priest, the antagonist to the Teacher of Righteousness who was the leader of the Essenes. Jesus the Wicked Priest revitalizes the Gospel message by revealing Jesus’s true role as a tireless social reformer and revolutionary teacher. Vining’s study reopens Christian doctrinal questions supposedly long settled, such as reincarnation and the Virgin birth--even demonstrating that these two issues are related. He discloses that the angel Gabriel was incarnate in a living human being and transmitted the seed of a holy bloodline to the Virgin Mary.

Marvin Vining, an attorney who is in the process of ordination in the United Methodist Church, spent 14 years researching and writing this book. He is a Biblical scholar who holds a master's degree in philosophy and has studied theology for many years. He lives in Mississippi, and his website is www.MarvinVining.com.

Praise For Jesus the Wicked Priest: How Christianity Was Born of an Essene Schism…

“Marvin Vining has produced a fascinating and engaging book with a provocative thesis--namely that the Dead Sea Scrolls refer directly to Jesus of Nazareth and that the Essene movement that they represent opposed him as the character they called ‘The Wicked Priest.’ This sort of connection between Jesus and the Dead Sea Scrolls, both in terms of chronology and history, has been dismissed by almost all scholars in the field. Vining skillfully puts the case back on the table. He deserves a careful reading by non-specialists and those in the academy alike.”
— James D. Tabor, Ph.D., chairman of the Department of Religious Studies, UNC Charlotte, and author of

“Vining’s work is remarkable Christian scholarship. I highly recommend this book to anyone interested in the Essenes, Jesus, and the early Christian Church.”
— Clayton Sullivan, Ph.D., author of Rescuing Jesus from the Christians

" . . . an attention-getting and provocative title. Appropriate, too, for the inevitably controversial ideas put forth in Vining's book. . . . The premise for this interesting interpretation comes from the Dead Sea Scrolls, which speak of the Teacher and the Wicked Priest."
— Curled Up with a Good Book

"[Vining] makes no excuses for his leaps of faith, but instead documents them as the insights they are. While this is hardly the first or last word on any of these topics, Vining's unique reconstruction is a valuable contribution to the field."
— The Pokey Finger of God, June 08

"While this is a book aimed at a Christian audience, it does offer some perspective on Pagan beliefs in the early Common Era. Whether or not you find it useful in your own understanding of Christian origins, it should encourage an open-minded approach to religion in general."
— Michael Gleason, Witchgrove.com, April 08

"Vining shows the reader why Jesus is the Wicked Priest for reacting against some of the strict ascetic and often self-defeating doctrines of the Essenes. . . . This is a controversial work. It does challenge many Christian doctrines. Vining has done detailed research and it is apparent in his writing that he is a man of great faith. . . . suitable for both the interested lay person as well as the biblical scholar."
— Jennifer Hoskins, New Dawn, No. 113, Mar/Apr 2009
or support indie stores by buying on
Copyright © 2020 American Booksellers Association