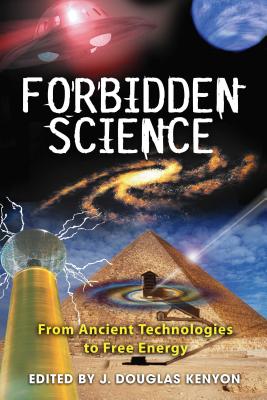 From Ancient Technologies to Free Energy

Following the model of his bestselling Forbidden History and Forbidden Religion, J. Douglas Kenyon has assembled from his bimonthly journal, Atlantis Rising, material that explores science and technology that has been suppressed by the orthodox scientific community--from the true function of the Great Pyramid and the megaliths at Nabta Playa to Immanuel Velikovsky’s astronomical insights, free energy from space, cold fusion, and Rupert Sheldrake’s research into telepathy and ESP.

There is an organized war going on in science between materialistic theory and anything that could be termed spiritual or metaphysical. For example, Masaru Emoto’s research into the energetics of water, although supported by photographic evidence, has been scoffed at by mainstream science because he has asserted that humans affect their surroundings with their thoughts. The materialism or absolute skepticism of the scientific establishment is detrimental to any scientific inquiry that thinks outside the box. This mentality is interested in preserving funding for its own projects, those that will not rock the establishment. From Tesla’s discovery of alternating current to Robert Schoch’s re-dating of the Sphinx, this book serves as a compelling introduction to the true history of alternative and New Science research.

Praise For Forbidden Science: From Ancient Technologies to Free Energy…

"If 'fringe science', or 'voodoo science' (to use a couple of establishment buzzwords) interests you; if you are open to non-traditional views of the universe (potential anti-gravity, archeo-astronomy, alien life forms, and ESP among others); if you simply want to see the 'other side' of the arguments; this book should be an interesting read for you."
— Michael Gleason, Witchgrove.com, Mar 2008

"This book serves as a compelling, if controversial, introduction to the true history of alternative and New Science research, as well as fascinating possible truths about the world we live in."
— The Beacon, Oct - Dec 2008

"In these pages, you will find clearly delineated arguments as to why the materialistic prejudice of the scientific establishment, committed to preserving funding for its own projects, is detrimental to any scientific inquiry that thinks outside the box."
— Chiwah, The Light Connection, June 2008

"This volume may interest those who study public attitudes toward science or the boundary between science and pseudoscience."
— F.N. Egerton, emeritus, University of Wisconsin, Choice, Vol. 46, No. 01, Sep 2008

"We are coming to realize that consciousness not only affects matter but creates it, not the other way around, which is the traditional Newtonian view. Read what 19 cutting-edge scientists have to say about this and other "out of the box" discoveries that are being suppressed."
— Rahasya Poe, Lotus Guide, Issue 27, Sep/Oct 2008

“Forbidden Science is a dangerous book. And by dangerous I mean that in a sense of awakening.”
— Horror News.net, November 2010

For almost a quarter-century, J. Douglas Kenyon was the editor and publisher of Atlantis Rising magazine. He is the author and editor of several books, including Forbidden History and Forbidden Science, and the writer, producer, and narrator of several documentary films, including Technologies of the Gods, Clash of the Geniuses, and The Atlantis Connection. He lives in Georgia.
Loading...
or support indie stores by buying on