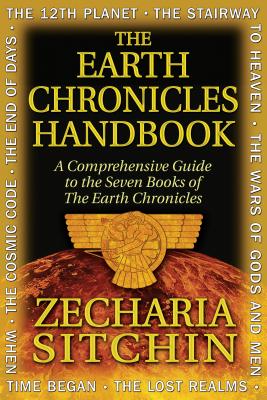 A Comprehensive Guide to the Seven Books of The Earth Chronicles

• Provides alphabetical listings to the terminology of ancient civilizations concerning their gods, kings, cultures, and religions

• Contains detailed summations, commentaries, and instructions for locating topics within all the author’s books

The Earth Chronicles series, a historical and archaeological adventure into the origins of mankind and planet Earth, began with the publication of the bestselling The 12th Planet. The series is based on the premise that the myths from the world’s earliest civilizations were in fact recollections of actual events and that the gods of ancient peoples were visitors to Earth from another planet--the Anunnaki, inhabitants of the 12th planet. The series’ books include The 12th Planet, The Stairway to Heaven, The Wars of Gods and Men, The Lost Realms, When Time Began, The Cosmic Code, and The End of Days, all products of the author’s unmatched study of the ancient records of Sumer, Babylonia, Assyria, Israel, and Egypt and the civilizations of pre-Columbian America. Unearthing the hidden history of Earth and mankind, the series uses the past to unveil the meaning of the prophesied future.

Zecharia Sitchin has created an encyclopedic compendium of the key figures, sites, concepts, and beliefs to provide a unique navigational tool through this entire opus. Entries are coded to indicate at a glance their cultural origin and contain summations, commentaries, and guidance for locating the topics within all of his books, including Genesis Revisited, Divine Encounters, The Lost Book of Enki, The Earth Chronicles Expeditions, and Journeys to the Mythical Past.

"You can't know where you are going without knowing where you've come from--if you disagree, then just look at the news to see what I'm talking about. Zecharia Sitchin's universal field theory of humanity could, and for his millions of readers it has, in and of itself, started the peoples of the world on the road to unity. Reading his work explains so much, it makes sense, it feels right, you name it. And it's very entertaining because the story of mankind's creation is the most interesting story in history, no?"
— Monte Farber, reviewer

" . . . invaluable for keeping the reader on top of the mass of information contained in Sitchin's books. If you haven't yet ventured into the Chronicles, here's your launching pad."
— Nexus New Times Magazine, Vol. 16, No. 4, June-July 2009

"For anyone just getting started on Zecharia's work, I suggest reading 12th Planet and Genesis Revisited and keeping this handbook close. For those interested in facts, this is a must for getting to the bottom of our human history."
— Rahasya Poe, Lostus Guide magazine, July 2009

" . . . a 'must' for collections already owning most of [Sitchin's] treatises. New Age libraries will find it a powerful conclusion."
— The Midwest Book Review, Oct 2009

"Fans of Sitchin will greatly appreciate this condensation of information; those unfamiliar with his work may discover ideas of interest to explore further. . . Open this book anywhere and begin to dream."
— David Paulsen, Ekaha Enchanments, Hawaii, Feb 2010 >

". . . serves as a handy reference book for anyone interested in the study of ancient man and his mythologies and religions. . . . an essential addition to your Ufological library."
— Sean Casteel, Conspiracy Journal, May 2010

One of the few scholars able to read the clay tablets and interpret ancient Sumerian and Akkadian, Sitchin based The Earth Chronicles series on the texts and pictorial evidence recorded by the ancient civilizations of the Near East. His books have been widely translated, reprinted in paperback editions, converted to Braille for the blind, and featured on radio and television programs.
Loading...
or support indie stores by buying on