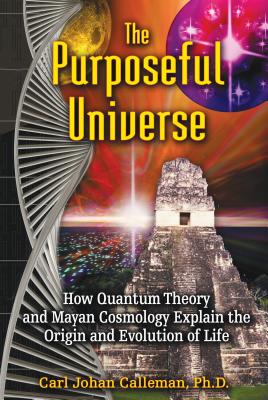 Identifying the Mayan World Tree with the central axis of the cosmos, the author shows how evolution is not random

Using recent findings within cosmology, coupled with his broad understanding of the Mayan Calendar, biologist Carl Johan Calleman offers a revolutionary and fully developed ­alternative to Darwin’s theory of biological evolution--and the theory of randomness that holds sway over modern science. He shows how the recently discovered central axis of the universe correlates with the Tree of Life of the ancients. This provides an entirely new context for physics in general and especially for the origin and evolution of life and suggests that we look upon ourselves as parts of a hierarchy of systems that are all interrelated and evolve in a synchronized way.

Calleman’s research demonstrates that life did not just accidentally “pop up” on our planet, but that Earth was a place specifically tagged for this. He demonstrates how the Mayan Calendar describes different quantum states of the Tree of Life and presents a new explanation for the origin and evolution of consciousness. Calleman uses his scientific background in biology and cosmology to show that the idea of the Purposeful Universe is real. He explains not only how DNA but also entire organisms have emerged in the image of the Tree of Life, a theory that has wide-ranging consequences not only for medicine but also for the origin of sacred geometry and the human soul. With this new theory of biological evolution the divide between science and religion disappears.

Praise For The Purposeful Universe: How Quantum Theory and Mayan Cosmology Explain the Origin and Evolution of Life…

“Between the simplicity of religion and the absurdity of an empty randomness, Carl Johan Calleman here proposes to us a brilliant but plausible third way: The Tree of Life. Here we have finally a modern theory of the origin and evolution of life that unifies the most recent discoveries of science with ancient wisdom. Without ever imposing God on us, this great book brings agnostics like myself to face the evidence.”
— Jean-Claude Perez, Ph.D., author of Codex Biogenesis: les 13 codes de I’AND [The 13 Codes of D

"Inherent in Dr. Calleman's unified theory of physical and biological evolution is the notion that, contrary to the scientific norm, the universe does have purpose, direction, and meaning and is imbued with beauty and intelligence. . . . This is biology with soul."
— Nexus New Times Magazine, Vol. 17, No.2, Feb/Mar 2010

"Together with Dr. Calleman's two previous books on the Mayan Calendar, this book is for me like the last piece of the puzzle. I think I have been waiting for this book since I was a child gazing at the stars, wondering."
— Bente Brunvoll, March 2010

Carl Johan Calleman holds a Ph.D. in Physical Biology and has served as an expert on chemical carcinogens for the World Health Organization. He began his studies on the Mayan calendar in 1979 and now lectures throughout the world. He is also author of The Purposeful Universe, Solving the Greatest Mystery of Our Time: The Mayan Calendar and The Mayan Calendar and the Transformation of Consciousness. He lives in Santa Fe, New Mexico.
or support indie stores by buying on