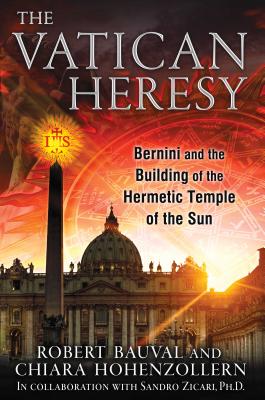 Bernini and the Building of the Hermetic Temple of the Sun

Reveals how the largest Sun Temple in the world, built according to Hermetic principles, is located at one of Christianity’s holiest sites: the Vatican

• Reveals how the design was masterminded by Bernini, Jesuit scholars, the mystical Queen Christine of Sweden, and several popes

In 16th century Italy, in the midst of the Renaissance, two powerful movements took hold. The first, the Hermetic Movement, was inspired by an ancient set of books housed in the library of Cosimo de’ Medici and written by the Egyptian sage Hermes Trismegistus. The movement expounded the return of the “true religion of the world” based on a form of natural magic that could draw down the powers of the heavens and incorporate them into statues and physical structures. The other movement, the Heliocentric Movement launched by Copernicus, was a direct challenge to the Vatican’s biblical interpretation of a geocentric world system. Declared a heresy by the Pope, those who promoted it risked the full force of the Inquisition.

Exploring the meeting point of these two movements, authors Robert Bauval and Chiara Hohenzollern reveal how the most outspoken and famous philosophers, alchemists, and scientists of the Renaissance, such as Giordano Bruno and Marsilio Ficino, called for a Hermetic reformation of the Christian religion by building a magical utopic city, an architectural version of the heliocentric system. Using contemporary documents and the latest cutting-edge theses, the authors show that this Temple of the Sun was built in Rome, directly in front of the Vatican’s Basilica of St. Peter. They explain how the Vatican architect Bernini designed St. Peter’s Square to reflect the esoteric principles of the Hermetica and how the square is a detailed representation of the heliocentric system.

Revealing the magical architectural plan masterminded by the Renaissance’s greatest minds, including Bernini, Jesuit scholars, Queen Christine of Sweden, and several popes, the authors expose the ultimate heresy of all time blessed by the Vatican itself.

Egyptian-born Robert Bauval began studying Egyptology in 1983. His first book, The Orion Mystery, was published in 1994, becoming a number-one bestseller translated into more than 25 languages. His research has been featured in documentaries throughout the world. He lives in Torremolinos, Spain.

Chiara Hohenzollern is a journalist who specializes in science and history. She lives in Rome, Italy.

Praise For The Vatican Heresy: Bernini and the Building of the Hermetic Temple of the Sun…

“Robert Bauval is a brilliant investigator of the hidden corners of history, and he has surpassed himself with The Vatican Heresy. It is a true time bomb of a book revealing stunning intrigues that have shaped the modern world and that call into question our most fundamental perceptions of the role of the Church of Rome.”
— Graham Hancock, author of War God and Fingerprints of the Gods

“With his usual care and attention to detail, Robert Bauval spins out the thread that joins the solar religion of pharaonic Egypt to the utopian hopes of the fading Renaissance. His theory climaxes with the dramatic and dangerous project of a pope (Urban VIII), a polymath (Kircher), an architect (Bernini), and an exiled queen (Christina). Their dream was of a united Christendom orbiting around Rome; their method, the marriage of Hermetic philosophy with the new astronomy, through symbolic architecture. Like Bauval’s other books about times and places when science and magic were one, The Vatican Heresy arouses curiosity, disbelief, nostalgia, and finally hope.”
— Joscelyn Godwin, Ph.D., author of The Pagan Dream of the Renaissance and Athanasius Kircher’s

“In this enchanting book, Robert Bauval and Chiara Hohenzollern reveal an astonishing fact hiding in plain sight. Surely thousands of visitors to the Vatican’s Saint Peter’s Square over the past three centuries have been puzzled by the gigantic ancient Egyptian obelisk featured in its center. Through meticulous research, The Vatican Heresy illuminates the profoundly evolutionary adventurers who employed deep symbolic insights and astute political maneuvering to construct a talismanic Hermetic City of the Sun in the heart of the citadel of Christendom. Read The Vatican Heresy. . . . I couldn’t put it down.”
— Thomas Brophy, Ph.D., coauthor of Black Genesis: The Prehistoric Origins of Ancient Egypt and Imhote

“It looks like Robert Bauval (now with coauthor Chiara Hohenzollern) has done it again, revealing that not just the pyramids but the Vatican itself is a celebration of sacred architecture. A fascinating theory and very timely.”
— Adrian G. Gilbert, coauthor of The Orion Mystery and author of Secrets of the Stone of Destiny
or support indie stores by buying on
Copyright © 2020 American Booksellers Association