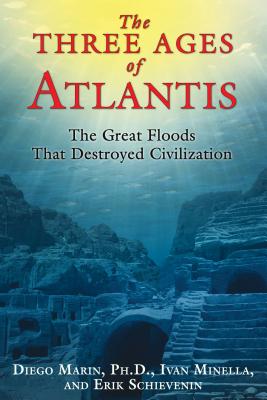 The Three Ages of Atlantis

The Great Floods That Destroyed Civilization

• Reveals that there was not one but three Atlantises--the first in Antarctica, the second in South America, and the third in the Mediterranean

• Shows how these flood dates directly parallel the freezing of Antarctica, the migrations of Cro-Magnon men, and the destruction of Atlantis according to Plato

15,000 years ago the Earth’s axis tilted, shifting the geographic poles. Volcanoes erupted, the icecaps melted, and the seas rose dramatically. Antarctica was enveloped in ice, destroying the high civilization of prehistory: Atlantis. But before the survivors could reestablish what they had lost, catastrophe struck again--twice.

Uniting scientific findings with theories on the location of Atlantis, the authors reveal that there was not one but three Atlantises--the first in Antarctica, the second in South America, and the third in the Mediterranean. Examining paleoclimatology data, they show that Antarctica was temperate 15,000 years ago and home to the original Atlantis. They explore geological evidence of three worldwide super-floods 15,000, 11,600, and 8,700 years ago and show how these dates directly parallel the freezing of Antarctica, the arrival of Cro-Magnon man in Europe, and the destruction of Atlantis according to Plato. Uncovering the influence of the Atlanteans in Proto-Indo-European languages and in massive ancient monuments aligned with the stars, they show how the civilization founders in all early myths--the Pelasgians, Danaans, Viracocha, Aryans, and others--were part of the Atlantean diaspora and how this migration split into two major movements, one to Latin America and the other to Europe and Asia.

Following the Atlanteans from a warm Antarctica up to Peru, Mexico, and the Mediterranean, they reveal that Cro-Magnon men are the people of Atlantis and that we are just now returning to their advanced levels of science, technology, and spirituality.

Praise For The Three Ages of Atlantis: The Great Floods That Destroyed Civilization…

“Diego Marin is a physicist who has spent many years in his quest for ‘Atlantis.’ His book is a well-researched and stimulating piece of detective work as well as a great read for all the devotees of this intriguing topic.”
— Robert Bauval, author of The Orion Mystery, Black Genesis, and Breaking the Mirror of Heaven

Diego Marin, Ph.D., has a doctorate in theoretical physics and has extensively studied the comparative mythology, esoteric traditions, and history of the Near and Middle East. A cofounder of the Pangea Cultural Association, he lives in Italy.

Ivan Minella is an archaeologist specializing in European protohistory, archaeometallurgy, and remote sensing. He has made excavations in Burkina Faso, Festos in Crete, and in Sardinia. A cofounder of the Pangea Cultural Association, he lives in Italy.

Erik Schievenin is a geologist specializing in erosions and fracture lines whose research has led to a controversial re-dating of the Sphinx and several megalithic temples. A cofounder of the Pangea Cultural Association, he lives in Italy.
Loading...
or support indie stores by buying on