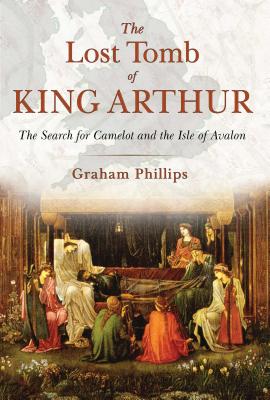 The Lost Tomb of King Arthur

The Search for Camelot and the Isle of Avalon

• Pinpoints the exact locations of Arthur’s tomb, the ruins of Camelot, and the sword Excalibur using literary research and the latest geophysics equipment

• Reveals the mythic king as the real-life leader Owain Ddantgwyn, who united the British to repel invasion from Germany around 500 AD

One of the most enigmatic figures in world history, King Arthur has been the subject of many fantastical tales over the past 1500 years, leading many scholars to regard him and his fabled city of Camelot simply as myth. But, as Graham Phillips shows through a wealth of literary and scientific evidence, King Arthur was a real man, Camelot a real place, and the legendary Excalibur a real sword--and Phillips has located them all.

Phillips examines the earliest stories of Arthur as well as previously unknown ancient manuscripts preserved in the vaults of the British Library in London, such as the work of the 9th-century monk Nennius, to pinpoint the exact locations of Arthur’s tomb, the ruins of Camelot, and the sword Excalibur. He reveals the mythic king as the real-life leader Owain Ddantgwyn, who united the British to repel invasion from Germany around 500 AD. Moving his quest from library vaults to the real sites of Arthur’s life, the author confirms his research through a Dark Age monument, hidden away in the mountains of western Britain, that bears an inscription about a powerful warlord who went by the battle title “Arthur.” He visits archaeological excavations at the ruins of Viroconium, near Wroxeter in Shropshire, clearly identifying the ancient city as Camelot, the fortified capital of Arthur’s Britain. Working with specialist divers and marine archaeologists, he surveys the depths of an ancient lake in the English countryside to reveal the resting place of Excalibur. Enlisting a team of scientists and sophisticated geophysics equipment, he uncovers the lost grave of the historical King Arthur, buried with his shield, just as told in legend.

The culmination of 25 years of research, including new translations of primary source material, this book provides the necessary evidence to allow King Arthur to finally be accepted as the authentic British king he was.

Praise For The Lost Tomb of King Arthur: The Search for Camelot and the Isle of Avalon…

“Graham Phillips’s erudite, convincing, and definitive deductions have led to very real discoveries apparent for all to see. In The Lost Tomb of King Arthur Graham reveals the true history and final resting place of Britain’s most famous legendary king.”
— Andrew Collins, author of Göbekli Tepe: Genesis of the Gods

“Another must-read for anyone interested in the often inconvenient truth of history from the audacious and persuasive Graham Phillips. This book will challenge much of what you think you know about Arthur--but in a good way!”
— Lynn Picknett, coauthor of The Templar Revelation and Turin Shroud: In Whose Image? the Truth Behind

“The history of King Arthur, and whether he truly existed, has been studied by many scholarly disciplines--it is an immense jigsaw puzzle. In this book, Graham Phillips brings these pieces together to form a coherent picture of who the historical Arthur actually was. Always engaging and informative, this book penetrates the mystery of one of England’s iconic heritage figures.”
— Storm Constantine, author of The Magravandias Chronicles

“Just when you thought the legend of King Arthur was a fairytale, Graham Phillips shatters the illusion with historical facts, discoveries, and theories that challenge everything you thought you knew about the once and future king. Compelling read for all questers of the truth.”
— Andrew Gough, writer, presenter, and editor of The Heretic Magazine

Graham Phillips is the author of The End of Eden, The Templars and the Ark of the Covenant, Atlantis and the Ten Plagues of Egypt, The Chalice of Magdalene, and The Moses Legacy. He lives in the Midlands of England.
Loading...
or support indie stores by buying on