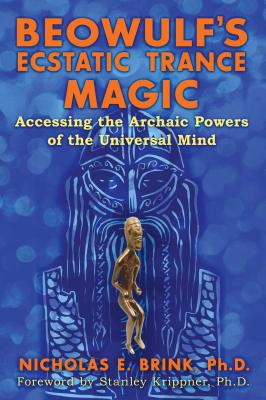 Accessing the Archaic Powers of the Universal Mind

Using the altered state of ecstatic trance to access the memories of the Universal Mind, Nicholas Brink takes us back to ancient Scandinavia, to the time of the epic of Beowulf, the oldest piece of literature written in the English language. Sharing his ecstatic trance techniques along the way, his journey allows us to re-experience the life and shamanic practices of Queen Wealhtheow, the wife of King Hrothgar, the king rescued by Beowulf from the torment of the monster Grendel.

Revealing a hidden side to the epic of Beowulf, Brink details how Grendel respected and would not harm Queen Wealhtheow and her teacher Vanadisdottir, a priestess of the goddess Freyja, for they practiced the ancient magic of the earlier hunter-gatherer era when the Great Mother Earth was worshipped. In the time of the queen the peaceful and compassionate traditions of this era were becoming forgotten, succumbing to settlements, kingdoms, and territorial disputes. We gain first-person experience of Wealhtheow and Vanadisdottir’s veneration of the Great Mother and the ancient magic of the early Nordic people as practiced by the seiðr workers, seers, and spirit travelers, the shamans of the time. These practices include divination through the goddess Freyr, contacting Bear spirits, and spirit journeying to various realms.

As we experience our own time of transition and turmoil much like that of Beowulf’s time, Nicholas Brink reveals how the original magic of our ancestors, as practiced by Queen Wealhtheow, provides a blueprint for our emergence from the warlike nature of the past into a time of peace and compassion for our Great Mother Earth.

Nicholas E. Brink, Ph.D., is a psychologist and a certified teacher of ecstatic trance with the Cuyamungue Institute. Board certified by the American Board of Professional Psychology, he is the author of several books, including The Power of Ecstatic Trance. He lives in Coburn, Pennsylvania.

Stanley Krippner, Ph.D., is a professor of psychology at Saybrook University and past president of the Association for Humanistic Psychology. The recipient of several distinguished awards and author and coauthor of many books, including Demystifying Shamans and Their World, he lives in San Rafael, California.

“With Beowulf’s Ecstatic Trance Magic, Nick Brink has taken one more (big) step in his ‘walk between the worlds’ of contemporary consciousness psychology and ancient Norse lore. He has emerged as an authoritative and influential voice in this under-appreciated but extremely powerful area of esoteric studies. We can all learn from his soul-awakening explorations.”
— Stephen Larsen, Ph.D., author of The Neurofeedback Solution, The Shaman’s Doorway, The Mythic

“Here Brink returns with his lively combination of ancestral imagination, mythology, and historical reality, applying it this time to the oldest known epic poem written in the English language. Again referring to a series of ecstatic trance postures that have been identified elsewhere as having ancient use for facilitating a variety of meditative inquiries, the book becomes a detailed, novel-length account of the author’s own ecstatic trance journeys into the story of Beowulf. The author, as he should, leaves the reader to form his or her own opinion as to the degree to which the amplifications of the story can be taken literally or as metaphor, as reality or imaginal fantasy, as personal or collective. As James Hillman suggested, imagination and soul are fundamentally the same thing, and in that sense this book is another soul-focused journey into some of the long ago roots of modern civilization.”
— Raymond Hillis, Ph.D., professor emeritus of counseling, California State University, Los Angeles

“Brink presents an interesting system of inducing trance by means of ritual postures and uses it to present an imaginative look at an Anglo-Saxon legend.”
— Alice Karlsdóttir, author of Norse Goddess Magic

“As we experience our own time of transition and turmoil much like that of Beowulf’s time, Nicholas Brink reveals how the original magic of our ancestors, as practiced by Queen Wealhtheow, provides a blueprint for our emergence from the warlike nature of the past into a time of peace and compassion for our Great Mother Earth.”
— The Edge, March 2016

“This is a must read for anyone interested in Ecstatic Trance, for anyone seeking ways to save our planet, and for students of Beowulf.”
— Barbara Hand Clow, April 2016
or
Not Currently Available for Direct Purchase
Copyright © 2020 American Booksellers Association