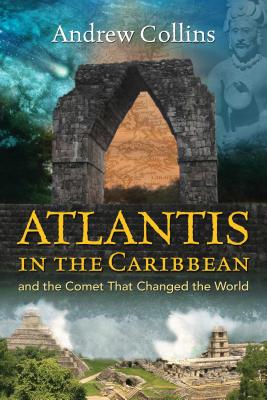 Atlantis in the Caribbean

And the Comet That Changed the World

An in-depth investigation of the mounting evidence that Atlantis was located in the Bahamas and Caribbean, near Cuba in particular

• Explains how Atlantis was destroyed by a comet, the same comet that formed the mysterious Carolina Bays

• Compares Plato’s account with ancient legends from the indigenous people of North and South America, such as the Maya, the Quiché, and the Yuchi of Oklahoma

The legend of Atlantis is one of the most intriguing mysteries of all time. Disproving many well-known Atlantis theories and providing a new hypothesis, the evidence for which continues to build, Andrew Collins shows that what Plato recounts is the memory of a major cataclysm at the end of the last Ice Age 13,000 years ago, when a comet devastated the island of Cuba and submerged part of the Bahaman landmass in the Caribbean. He parallels Plato’s account with corroborating ancient myths and legends from the indigenous people of North and South America, such as the Maya of Mesoamerica, the Quiché of Peru, the Yuchi of Oklahoma, the islanders of the Antilles, and the native peoples of Brazil. The author explains how the comet that destroyed Atlantis in the Caribbean was the same comet that formed the mysterious and numerous elliptical depressions, known as the Carolina Bays, found across the mid-Atlantic United States. He reveals evidence of sunken ruins off the coasts of both Cuba and the Bahamas, ancient complexes spanning more than 10 acres that clearly suggest urban development and meticulously planned road systems.

Revealing the identity of Plato’s “opposite continent” as ancient America, Collins argues that Plato’s story was first carried back to the Mediterranean world by trans-Atlantic mariners, such as the Phoenicians and Carthaginians, as early as the first millennium BC. He offers additional ancient trans-Atlantis trade evidence from Egyptian mummies, Roman shipwrecks in the Western Atlantic, and the African features of giant stone heads in Mexico. Piecing together the final days of Atlantis and the wildfires, earthquakes, tsunamis, days of darkness, and advancement of ice sheets that followed the ancient comet’s impact, Collins establishes not only that Atlantis did indeed exist but also that remnants of it survive today, most obviously in Cuba, Atlantis’s original central island.

Praise For Atlantis in the Caribbean: And the Comet That Changed the World…

“Collins has compiled the most thoughtful, comprehensive, and rational book ever written on the controversial topic of Atlantis. Skeptics deny that Plato’s Atlantis existed, but in this book compelling evidence is presented showing that an unrecognized and sophisticated maritime culture existed in the Atlantic during the last Ice Age.”
— Gregory Little, Ed.D., psychologist, explorer, and author of The Illustrated Encyclopedia of Native

“Collins produces a tantalizing pattern of oral and written evidence that Atlantis not only existed but probably was destroyed by a comet some 13,000 years ago.”
— Boston Herald

“Collins proves an engaging conductor of an exegetical tour of Plato’s writings about a civilization in the Western Ocean that vanished when a natural catastrophe befell its homeland. His book [will] enamor imaginations sparked by the legend of lost Atlantis.”
— Booklist

“A bold and imaginative attempt to understand the destruction of the legendary city of Atlantis, the creation of Mesoamerican civilization, and the end of the last Ice Age.”
— Kirkus Reviews

Andrew Collins is a science and history writer, who has been investigating the origins of human civilization for over three decades. He is a noted explorer and the co-discoverer of a massive cave complex beneath the Giza plateau, now known as “Collins’ Caves.” He is the author of several bestselling books, including From the Ashes of Angels and Gobekli Tepe: Genesis of the Gods. He lives in southeast England.
Loading...
or support indie stores by buying on