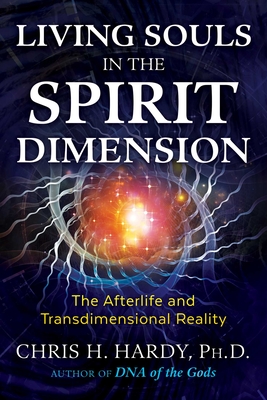 Living Souls in the Spirit Dimension

The Afterlife and Transdimensional Reality

An examination of our consciousness’s ability to pass between dimensions, both in life and after death, and how to communicate with spirits

• Provides evidence that the deceased keep in contact with their loved ones and are able to visit them as apparitions, give them advice, and protect them

• Offers rigorous scientific analysis of paranormal occurrences, including evidence of life after death, house spirits, near-death and out-of-body experiences, and communication with the souls of the deceased

In this exploration of consciousness, after-death communication, and the validity of near-death and out-of-body experiences, Chris H. Hardy, Ph.D., a former researcher at Princeton’s Psychophysical Research Laboratories, reveals that all beings exist simultaneously in the material dimension and in the soul hyperdimension. During life, we can access the soul hyperdimension through heightened states of consciousness and dreams. After death, we cease to physically exist, but our consciousness continues on in the hyperdimension as a living soul, a complete personality able to perceive and even affect the material world.

Through rigorous scientific analysis of psi experiences and surveys, the author shows that the deceased keep contact with the living by visiting them as apparitions, protecting them from harm, and even interceding to solve family problems or resolve their own unfinished business. She details her own psi and spiritual experiences, such as interactions with a house spirit, clairvoyance in lucid dreams, and her decades of communication with the souls of the deceased, including her own parents and scientific geniuses, and provides empirical evidence to support their reality. Moreover, Hardy offers tested methods for gaining access to the soul dimension and explores what can be accomplished there, including communicating with those who exist beyond our own matter world.

Sharing her breakthrough understanding of the soul dimension as a hyperdimension pervading the universe, where our consciousness lives on after physical death, Hardy shows that we are all transdimensional beings and that the living souls of the spirit dimension welcome our interaction.

Praise For Living Souls in the Spirit Dimension: The Afterlife and Transdimensional Reality…

“Chris Hardy’s latest work follows a series of provocative but wellresearched and brilliantly written books on fringe consciousness topics. But this is more than a personal history of her remarkable experiences in what she calls the ‘transdimensional reality.’ Hardy cites serious research that supports the importance of near-death experiences, out-of-body experiences, after-death communication, and similar topics for a full understanding of the many dimensions of human nature. Living Souls in the Spirit Dimension is written in a reader-friendly manner that clarifies the complex phenomena she describes.”
— Stanley Krippner, Ph.D., coauthor of Personal Mythology

“Chris Hardy is a natural mystic as well as a fine scholar. In this delightfully readable book she shares her experience on both sides of the veil and gives us an image-rich history of attitudes and beliefs about death from throughout the world.”
— Allan Combs, Ph.D., professor of transformative studies at the California Institute of Integral Stud

“Chris Hardy, the anthropology pioneer who has expanded our discipline to embrace the spiritual dimension of human existence and the coherent field generated by spiritual practices, opens our discipline even more with this new book that I highly recommend.”
— Sasha Alex Lessin, Ph.D., coauthor of Anunnaki Evolution of the Gods

“The oldest known map is from ancient Egypt. Interestingly enough, it depicts the afterlife. For the modern traveler to other worlds, I recommend Living Souls in the Spirit Dimension by Chris Hardy.”
— Mark Mirabello, Ph.D., author of A Traveler’s Guide to the Afterlife

Chris H. Hardy, Ph.D., holds a doctorate in ethno-psychology. A cognitive scientist and former researcher at Princeton’s Psychophysical Research Laboratories, she has spent many years investigating nonlocal consciousness through systems theory, chaos theory, and her own Semantic Fields Theory. The author of many research papers and published books, including DNA of the Gods and The Sacred Network, she lives in France.
or support indie stores by buying on