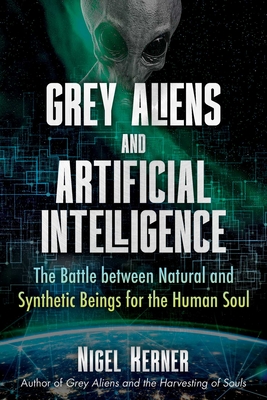 The Battle between Natural and Synthetic Beings for the Human Soul

• Explains how the Greys are bio-machines, synthetic beings sent out to gather information about human souls and natural consciousness

Humanity’s biggest existential threat is our headlong rush to a technologically advanced future. Already we increasingly rely on smart devices to the point that they are becoming extensions of our bodies. We are at a turning point for our species in which our natural humanity is gradually being converted into an artificial format that will lead to the loss of our souls. And, as Nigel Kerner reveals in astonishing detail, the blueprints for this future already exist.

Kerner explains how there are civilizations in our universe that have developed advanced technologies to become entirely artificial. The Grey alien entities, reported in tens of thousands of abductions, appear to be biomachines, synthetic beings sent out as AI probes to gather information about something they lack that humans and other natural beings possess: a soul. Examining scientific, historical, cultural, and religious evidence for Grey alien visitations as far back as 40,000 years ago, the author reveals that the Greys themselves set us on this path toward artificial intelligence millennia ago. Kerner shows how our intrinsic nature as human beings is no longer entirely human: our natural consciousness and DNA have been hacked, and an artificial construct has been superimposed at the very foundation of our thinking processes. The author shows how our rush toward a technologically advanced, artificially intelligent future was seeded and precipitated by the Greys in order to control us and prepare us to fit in with their agenda for humanity.

Revealing the secret alien hives on our planet, their connections to governments, and their ultimate endgame to harvest our souls and alter our DNA, Kerner also shows how, by developing yourself on a soul level, by recognizing your individual connection to divinity, you can protect your soul field and your consciousness from the Greys’ terrible manipulations.

Praise For Grey Aliens and Artificial Intelligence: The Battle between Natural and Synthetic Beings for the Human Soul…

“As Earth’s human technologies in the twenty-first century move rapidly to dependence on robotic artificial intelligence, Nigel Kerner warns that Grey nonhumans that interact with our planet are actually cloned artificial intelligence that want our organic human souls. Will organic versus inorganic intelligence be the cosmic battle of 2100?”
— Linda Moulton Howe, Emmy and Peabody Award-winning investigative TV journalist and reporter and edit

Nigel Kerner (1946–2022) was a screenwriter, journalist, and author of Grey Aliens and the Harvesting of Souls and The Song of the Greys. He lived in England.
Loading...
or support indie stores by buying on