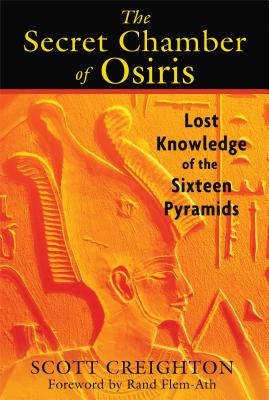 The Secret Chamber of Osiris (Paperback)

Lost Knowledge of the Sixteen Pyramids

After nearly 200 years of the pyramid-as-tomb theory, a growing body of evidence suggests the first 16 pyramids of ancient Egypt were not royal tombs but nearly indestructible recovery vaults designed to revive civilization after an anticipated major catastrophe, the Deluge of Thoth.

Scott Creighton examines the prophecy of catastrophe and the ancient Egyptians’ massive undertaking to ensure the survival of their civilization. He explains how the pyramids acted as easily located storehouses for seeds, tools, and civilizing knowledge, yet they would have been too visible to house the precious treasures necessary to restore the rich culture of ancient Egypt. For this, the ancients created a secret chamber whose existence was hidden in myth and whose location was encoded in the Giza pyramids.

Creighton shows how, collectively, the first 16 pyramids represent the allegorical “dismembered body of Osiris,” the Egyptian god of agriculture and rebirth, and, as in the myth of Osiris, one part is missing or hidden--a secret chamber under the sands of the Giza plateau. Creighton reveals how the 3 great pyramids of Giza “point” to the secret location and how they were built with technology akin to modern hot air balloons, used to “fly the stones into place” as cited in Egyptian legends and shown in ancient art.

Offering a new understanding of this remarkable civilization, the author concludes with a startling revelation: shortly after he revealed the location of the secret chamber of Osiris--a location never before explored--it became the site of a major excavation by the Egyptian authorities, the results of which have yet to be made public.

Scott Creighton is an engineer whose extensive travels have allowed him to explore many of the world’s ancient sacred sites. The host of the Alternative Egyptology forum on AboveTopSecret.com, he lives in Glasgow, Scotland.

Rand Flem-Ath is a librarian and coauthor of The Atlantis Blueprint. He has appeared on the History Channel, the Discovery Channel, NBC, CBC, and the BBC as well as on numerous radio shows. He lives on Vancouver Island in British Columbia.

Praise For The Secret Chamber of Osiris: Lost Knowledge of the Sixteen Pyramids…

“In The Secret Chamber of Osiris, Scott Creighton presents an intriguing and insightful perspective on the Egyptian pyramids, the geometry of their placement, and their relationship to a body of ancient hidden knowledge. He succeeds in presenting well-considered ideas within the context of a very readable book.”
— Laird Scranton, author of Sacred Symbols of the Dogon

“Creighton exposes very real scientific problems and guides us along a fascinating path as he researches novel solutions and offers a radical and fresh explanation for one of the world’s oldest mysteries. Scott’s power of imagination is matched only by the discipline of his logic.”
— Rand Flem-Ath, coauthor of Atlantis beneath the Ice
or
Buy Here
Copyright © 2020 American Booksellers Association