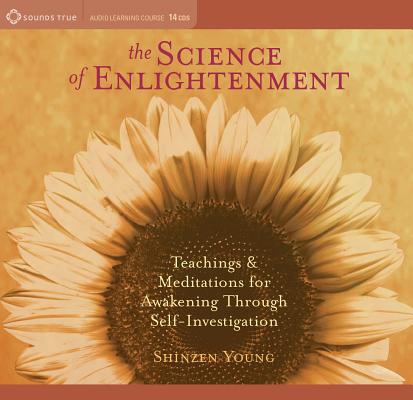 Teachings and Meditations for Awakening Through Self-Investigation

What is enlightenment? Is it a myth or is it real? On The Science of Enlightenment, you will learn that the liberated state is as real as the sensations you are having right now. For it is through the investigation of your own thoughts and feelings that you can awaken to clear insight and a happiness independent of conditions: the state of enlightenment.

Through his expertise in both science and spirituality, meditation teacher Shinzen Young demystifies the principles of awakening hidden within the world's great spiritual traditions and shows you how to use them in your own life.

Here, in an unequaled 14-CD course covering traditional teachings, scientific insights, and practical instructions, you will test for yourself the discoveries of the great wisdom traditions, including Buddhism, Christianity, Jewish mysticism, Sufism, Hinduism, shamanism, and many others.

Why is single-pointed concentration so highly regarded on every contemplative path? How do you move beyond emotional/intellectual blocks and into a state of highest presence? Where do psychic powers and other mystical phenomena fit in the architecture of enlightenment? How do you know if your meditation practice is working?

On The Science of Enlightenment, Shinzen Young elucidates these questions with precision and intelligence, demonstrating why he is regarded as one of the Western world's most articulate and understandable teachers of classical mystical experience.

The search for awakening is not limited to a chosen few. It is a field open for you to investigate—once you possess the inner technologies to do so. Now you can begin that investigation with The Science of Enlightenment. Includes six complete guided meditation sessions.

Six common traps on the path to awakening - and how to avoid them
• Ancient mystical teachings in clear, modern language
• Fascinating research about meditation and your brain-wave states, perceptual acuity, oxygen levels, and aging
• How meditation enhances your learning, athletic performance, relationships, and emotional life
• Why your body is the greatest mystical teacher
• How to digest harmful mental blockages through inner work
• Samadhi—your inner microscope for self-understanding
• Inner healing techniques you won't learn in psychotherapy
• What to do if you lack discipline
• An expansive survey of awakening practices from their tribal roots to the Information Age
Course objectives:

Discuss the benefits of having a regular meditation practice
• Recognize the similarities between the world’s oldest and largest spiritual traditions in terms of practices of concentration and ideas of enlightenment
• Utilize meditation practices that focus on relaxation, the body, thinking, the sense of self, expanding and contracting, and the sensory field
• Describe the meaning of enlightenment and the Buddhist practices used to reach enlightenment
• Summarize the Buddhist perspective on the self, "the no-self," and how this is brought into meditation practice
• Apply Western scientific knowledge to Eastern spiritual practices in order to understand the benefits of both
• Identify the differences between reaching the source of consciousness/enlightenment, and the realm of power/new age phenomena