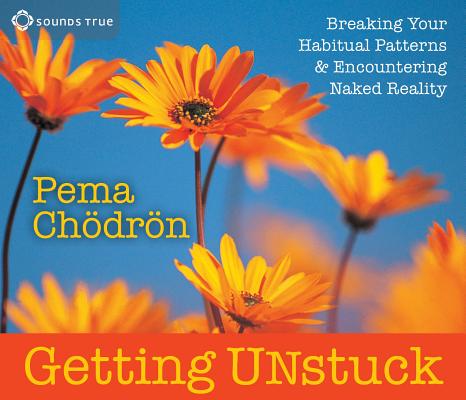 Have you ever had an itch and not scratched it? In the Buddhist tradition, this points to a vast paradox: that by refraining from our urge to scratch, great peace and happiness is available.

On Getting Unstuck, Pema Chödrön introduces a rare Tibetan teaching she received from her teacher, Dzigar Kontrul Rinpoche, and one that has become critical to her practice. Here, she unveils the mystery of an ineffable quality: a pre-emotional feeling that arises in us, brings us discomfort, and causes us to react by escaping the discomfort often with harmful habits.

With Getting Unstuck, she offers us a first look at both the itch and the scratch, which Tibetan Buddhists call shenpa. On this full-length recording, Pema Chödrön, bestselling author and beloved American Buddhist nun, shows us how to recognize shenpa, catch it as it appears, and develop a playful, lively curiosity toward it. Join Pema Chödrön to discover more about:

Critical mind—how to recognize this fundamental shenpa, and approach yourself and others with a sense of humor and loving-kindness
• Ways to unravel the patterns of self-denigration, and develop the fundamental maitri—loving-kindness—toward yourself
• How to cultivate acceptance of your irritability, insecurities, and other simply human traits
• Recognition, Refrain, Relaxing, and Resolve: the four R's of working with shenpa, and more
An urge comes up, we succumb to it, and it becomes stronger, teaches Pema Chödrön. We reinforce our cravings, habits, and addictions by giving in to them repeatedly. On Getting Unstuck, Chödrön guides us through this sticky feeling, exploring the moments when we get hooked, and offers us tools for learning to stay with our uneasiness, soften our hearts toward ourselves and others, and live a more peaceful life in the fullness of the present moment.


Praise For Getting Unstuck: Breaking Your Habitual Patterns and Encountering Naked Reality…

“Chödrön demonstrates how effective the Buddhist point of view can be in bringing order into disordered lives.” —Publishers Weekly

Ani Pema Chödrön was born Deirdre Blomfield-Brown in 1936, in New York City. She attended Miss Porter's School in Connecticut and graduated from the University of California at Berkeley. She taught as an elementary school teacher for many years in both New Mexico and California. Pema has two children and three grandchildren.

While in her mid-thirties, Ani Pema traveled to the French Alps and encountered Lama Chime Rinpoche, with whom she studied for several years. She became a novice nun in 1974 while studying with Lama Chime in London. His Holiness the Sixteenth Karmapa came to Scotland at that time, and Ani Pema received her ordination from him.

Pema first met her root guru, Chögyam Trungpa Rinpoche, in 1972. Lama Chime encouraged her to work with Rinpoche, and it was with him that she ultimately made her most profound connection, studying with him from 1974 until his death in 1987. At the request of the Sixteenth Karmapa, she received the full bikshuni ordination in the Chinese lineage of Buddhism in 1981 in Hong Kong.

Ani Pema served as the director of Karma Dzong in Boulder, Colorado until moving in 1984 to rural Cape Breton, Nova Scotia to be the director of Gampo Abbey. Chögyam Trungpa Rinpoche gave her explicit instructions on establishing this monastery for western monks and nuns.

Ani Pema currently teaches in the United States and Canada and plans for an increased amount of time in solitary retreat under the guidance of Venerable Dzigar Kongtrul Rinpoche. She is also a student of Sakyong Mipham Rinpoche, the oldest son and lineage holder of Chögyam Trungpa Rinpoche.

Ani Pema is interested in helping establish Tibetan Buddhist monasticism in the West, as well as continuing her work with western Buddhists of all traditions, sharing ideas and teachings. Her non-profit, The Pema Chödrön Foundation, was set up to assist in this purpose.

She has written several books: The Wisdom of No Escape, Start Where You Are, When Things Fall Apart, The Places that Scare You, No Time To Lose, Practicing Peace in Times of War, How to Meditate, and Living Beautifully. All are available from Shambhala Publications and Sounds True.