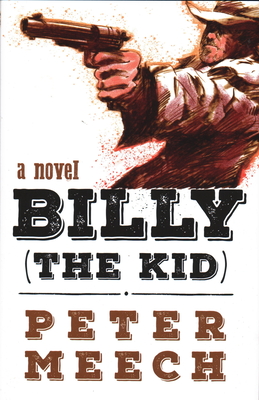 Pueblo, Colorado,1932. Bootleggers thrive in a town where the sheriff is on the take and you can kill a man with impunity. In this thrilling narrative, a once-famous outlaw finds himself thrust into the middle of a bootleg war against his will. At stake is nothing less than the life of his best friend and his last chance at true love with the town beauty. But is the legendary gunman who he claims to be, or is he just a retired dentist with a vivid imagination? In this remarkable first novel, Peter Meech reimagines the figure of Billy the Kid in a story told with verve and humor. Visually magnificent, and brimming with small-town charm, Billy (the Kid) builds to a climax that is as powerful as it is unexpected.

Peter Meech has had an international career as a writer, producer and director for television and film. Most recently he wrote, produced and directed the drama thriller Around Robin, starring Clementine Nicholson, Torrance Coombs and Ann Pirvu. Peter wrote for German television for two years and produced Jenifa in Japan with Robbie Robertson, starring Japan's heart-throb Takayuki Yamada. He has written, produced and directed several short films, including Winner: Best Short Film, starring Kevin Farley and John Farley. The award-winning film headlined film festivals around the world and was invited by Michael Moore to appear at his invitation-only Traverse City Film Festival. Peter has been much in demand as a script doctor for feature films. His television credits include HBO's The Adventures of Tintin (for which he was also voice-talent), Emily of New Moon (Disney, CBC), Masked Rider (Fox Family), VR Troopers (Fox Family), Ready or Not (Showtime), and Robert Halmi's Dracula: The Series (syndicated). His memoir Mysteries of the Life Force: My Apprenticeship with a Chi Kung Master has been translated into several languages. He received a Master's degree at Stanford where he won a full scholarship and received the Stanford Nicholl writing award, administered by veteran Hollywood producer Julian Blaustein. He is a member of the Writer's Guild of America, the Writer's Guild of Canada, the Animation Caucus of the WGA, BAFTA, SAG, the Dramatists Guild of America and ASCAP. He lives in Los Angeles, California.
Loading...
or support indie stores by buying on