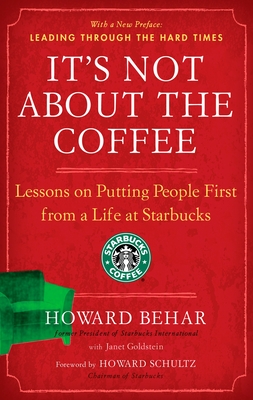 It's Not About the Coffee

Lessons on Putting People First from a Life at Starbucks

During his many years as a senior executive at Starbucks, Howard Behar helped establish the Starbucks culture, which stresses people over profits. He coached hundreds of leaders at every level and helped the company grow into a world-renowned brand. Now he reveals the ten principles that guided his leadership-and not one of them is about coffee. Behar shows that if you think of your staff as people (not labor costs) they will achieve amazing results. He discusses the importance of building trust, telling hard truths, thinking independently, and more. And he shares inside stories of key turning points for Starbucks, as it fought to hang on to its culture while growing exponentially.

Praise For It's Not About the Coffee: Lessons on Putting People First from a Life at Starbucks…

"A book about how to succeed anywhere-not just in business."
-Former U.S. Senator Bill Bradley

"The most down-to-earth, in-the-trenches, straightforward, and utterly useful leadership book I've ever read."
-James A. Autry, author of The Servant Leader

"The tips inside are intelligent, heartfelt, tested and honed in reality. Bravo."
-David Allen, author of Getting Things Done

Howard Behar was the North American president of Starbucks for 21 years. During his tenure, he grew the franchise from 28 stores to more than 15,000 across five continents and served on the Starbucks board of directors for 12 years until his retirement. His first book, It’s Not About the Coffee: Lessons on Leadership from a Life at Starbucks, was published in 2008, and since then he has been traveling the world speaking, mentoring, and spreading the message of leading with your values first. He lives in Seattle, Washington.

Janet Goldstein is a publishing consultant who has worked with entrepreneurs, business leaders, and nonprofits. She lives in New York.

Howard Schultz is chairman and chief executive officer of Starbucks, where he has been recognized for his leadership, business ethics, and efforts to strengthen communities. He and his wife, Sheri, have pledged extensive support to help veterans make successful transitions to civilian life through the Schultz Family Foundation’s Onward Veterans initiative. Schultz is the bestselling author of Onward: How Starbucks Fought for Its Life Without Losing Its Soul and Pour Your Heart Into It.
Loading...
or support indie stores by buying on