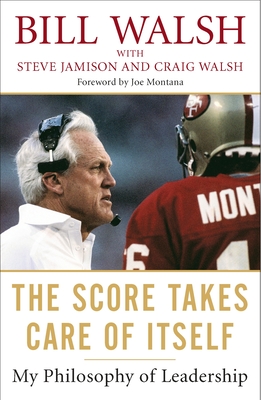 The Score Takes Care of Itself

My Philosophy of Leadership

The last lecture on leadership by the NFL's greatest coach: Bill Walsh

Bill Walsh is a towering figure in the history of the NFL. His advanced leadership transformed the San Francisco 49ers from the worst franchise in sports to a legendary dynasty. In the process, he changed the way football is played.

Prior to his death, Walsh granted a series of exclusive interviews to bestselling author Steve Jamison. These became his ultimate lecture on leadership.

Additional insights and perspective are provided by Hall of Fame quarterback Joe Montana and others.

Bill Walsh taught that the requirements of successful leadership are the same whether you run an NFL franchise, a fortune 500 company, or a hardware store with 12 employees. These final words of 'wisdom by Walsh' will inspire, inform, and enlighten leaders in all professions.

Praise For The Score Takes Care of Itself: My Philosophy of Leadership…

"Bill Walsh was one of the NFL's all-time best; a creative genius, a master at management, and a brilliant student of human nature. The Score Takes Care of Itself is his own personal and powerful road map to success as a leader whether in professional football or anywhere else. Terrific reading; tremendous insights."
-Roger Goodell, commissioner of the NFL

"The Score Takes Care of Itself is a leadership classic-a magnificent step-by-step tutorial on how to achieve success. It is practical, profound, and perfect for today's ultracompetitive business environment. Indispensable reading."
-Pat Williams, senior vice president of the Orlando Magic and author of What Are You Living For?

"The Score Takes Care of Itself is not about football. It's about how to treat people right. How to get the best out of the people around you. How to be a highly effective leader. I am thankful that this book about Bill Walsh's leadership point of view is now available to inspire countless leaders to come."
-Ken Blanchard, coauthor of The One Minute Manager(r) and Leading at a Higher Level

"Bill's personal examples of how he implemented and executed each of these steps in the transformation of the San Francisco 49ers creates a fascinating story of business, football, and triumph. More than anything, Bill's story reminds business leaders that success is not accidental but rather the result of deliberate and tenacious preparation."
-John F. Milligan, Ph.D., president and COO of Gilead Sciences, Inc.

Bill Walsh (1931–2007) is considered one of the greatest football coaches in NFL history. He is best known for serving as head coach of the San Francisco 49ers, during which time he popularized the West Coast offense, a style of play that emphasizes passing over running. Walsh was honored in 1993 with an election into the Pro Football Hall of Fame.

Steve Jamison is America's foremost author and authority on the life and leadership of UCLA icon John Wooden, who is often cited as the greatest coach of the twentieth century. Together they collaborated on nine popular publications, including Wooden: A Lifetime of Observations and Reflections On and Off the Court. Mr. Jamison has also written books with other famous coaches, such as football’s Bill Walsh and tennis legend Brad Gilbert. In addition to his publishing and producing career, he is a popular speaker as well as executive producer of the John R. Wooden Leadership Course.

Craig Walsh is the executive director of Santa Clara’s Healthy Kids program and a former marketing executive for the San Francisco 49ers. He is the son of legendary football coach Bill Walsh.
Loading...
or support indie stores by buying on