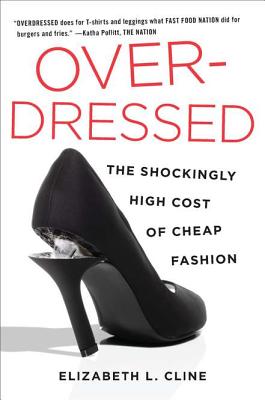 Until recently, Elizabeth Cline was a typical American consumer. She’d grown accustomed to shopping at outlet malls, discount stores like T.J. Maxx, and cheap but trendy retailers like Forever 21, Target, and H&M. She was buying a new item of clothing almost every week (the national average is sixty-four per year) but all she had to show for it was a closet and countless storage bins packed full of low-quality fads she barely wore—including the same sailor-stripe tops and fleece hoodies as a million other shoppers. When she found herself lugging home seven pairs of identical canvas flats from Kmart (a steal at $7 per pair, marked down from $15!), she realized that something was deeply wrong.
Cheap fashion has fundamentally changed the way most Americans dress. Stores ranging from discounters like Target to traditional chains like JCPenney now offer the newest trends at unprecedentedly low prices. Retailers are pro­ducing clothes at enormous volumes in order to drive prices down and profits up, and they’ve turned clothing into a disposable good. After all, we have little reason to keep wearing and repairing the clothes we already own when styles change so fast and it’s cheaper to just buy more.
But what are we doing with all these cheap clothes? And more important, what are they doing to us, our society, our environment, and our economic well-being?
In Overdressed, Cline sets out to uncover the true nature of the cheap fashion juggernaut, tracing the rise of budget clothing chains, the death of middle-market and independent retail­ers, and the roots of our obsession with deals and steals. She travels to cheap-chic factories in China, follows the fashion industry as it chases even lower costs into Bangladesh, and looks at the impact (both here and abroad) of America’s drastic increase in imports. She even explores how cheap fashion harms the charity thrift shops and textile recyclers where our masses of cloth­ing castoffs end up.
Sewing, once a life skill for American women and a pathway from poverty to the middle class for workers, is now a dead-end sweatshop job. The pressures of cheap have forced retailers to drastically reduce detail and craftsmanship, making the clothes we wear more and more uniform, basic, and low quality. Creative inde­pendent designers struggle to produce good and sustainable clothes at affordable prices.
Cline shows how consumers can break the buy-and-toss cycle by supporting innovative and stylish sustainable designers and retailers, refash­ioning clothes throughout their lifetimes, and mending and even making clothes themselves.
Overdressed
will inspire you to vote with your dollars and find a path back to being well dressed and feeling good about what you wear.


Praise For Overdressed: The Shockingly High Cost of Cheap Fashion…

“Cline is the Michael Pollan of fashion…Hysterical levels of sartorial consumption are terrible for the environment, for workers, and even, ironically, for the way we look.”
—Michelle Goldberg, Newsweek/The Daily Beast   “How did Americans end up with closets crammed with flimsy, ridiculously cheap garments? Elizabeth Cline travels the world to trace the rise of fast fashion and its cost in human misery, environmental damage, and common sense.” —Katha Pollitt, columnist for The Nation   “Overdressed is eye-opening and definitely turns retailing on its head. Cline’s insightful book reveals the serious problems facing our industry today. The tremendous values and advantages of domestic production are often ignored in favor of a price point that makes clothing disposable.” —Erica Wolf, executive director, Save the Garment Center