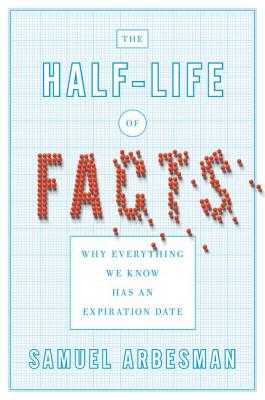 The Half-Life of Facts

Why Everything We Know Has an Expiration Date

New insights from the science of science

Facts change all the time. Smoking has gone from doctor recommended to deadly. We used to think the Earth was the center of the universe and that Pluto was a planet. For decades, we were convinced that the brontosaurus was a real dinosaur. In short, what we know about the world is constantly changing.

But it turns out there's an order to the state of knowledge, an explanation for how we know what we know. Samuel Arbesman is an expert in the field of scientometrics literally the science of science. Knowledge in most fields evolves systematically and predictably, and this evolution unfolds in a fascinating way that can have a powerful impact on our lives.

Doctors with a rough idea of when their knowledge is likely to expire can be better equipped to keep up with the latest research. Companies and governments that understand how long new discoveries take to develop can improve decisions about allocating resources. And by tracing how and when language changes, each of us can better bridge generational gaps in slang and dialect.

Just as we know that a chunk of uranium can break down in a measurable amount of time a radioactive half-life so too any given field's change in knowledge can be measured concretely. We can know when facts in aggregate are obsolete, the rate at which new facts are created, and even how facts spread.

Arbesman takes us through a wide variety of fields, including those that change quickly, over the course of a few years, or over the span of centuries. He shows that much of what we know consists of mesofacts facts that change at a middle timescale, often over a single human lifetime. Throughout, he offers intriguing examples about the face of knowledge: what English majors can learn from a statistical analysis of "The Canterbury Tales," why it's so hard to measure a mountain, and why so many parents still tell kids to eat their spinach because it's rich in iron.

"The Half-life of Facts" is a riveting journey into the counterintuitive fabric of knowledge. It can help us find new ways to measure the world while accepting the limits of how much we can know with certainty.


Praise For The Half-Life of Facts: Why Everything We Know Has an Expiration Date…

“Absorbing and approachable treatise on the nature of facts: what they are, how and why they change and how they sometimes don’t (despite being wrong)…Facts matter. But when they change—as they seem today to do with alarming frequency, we begin to lose that control. In his debut, Arbesman…advises us not to worry: While we can’t stop facts from changing, we can recognize that what we know ‘changes in understandable and systematic ways.’… With this, he introduces ‘scientometrics,’ the science of science. With scientometrics, we can measure the exponential growth of facts, how long it will take, exponentially, for knowledge in any field to be disproved—say, 45 years for medical knowledge…like a good college professor, Arbesman’s enthusiasm and humor maintains our interest in subjects many readers may not have encountered before…[The Half-Life of Facts] does what popular science should do—both engages and entertains.”
—Kirkus Reviews

“How many chromosomes do we have? How high is Mount Everest? Is spinach as good for you as Popeye thought—and what scientific blunder led him to think so in the first place? The Half-life of Facts is fun and fascinating, filled with wide-ranging stories and subtle insights about how facts are born, dance their dance, and die. In today’s world, where knowledge often changes faster than we do, Samuel Arbesman’s new book is essential reading.”
—Steven Strogatz, professor of mathematics, Cornell University, and author of The Joy of X

“What does it mean to live in a world drowning in facts? Consider The Half-life of Facts the new go-to book on the evolution of science and technology.”
—Tyler Cowen, professor of economics, George Mason University, and author of An Economist Gets Lunch

“The Half-life of Facts is a rollicking intellectual journey. Samuel Arbesman shares his extensive knowledge with infectious enthusiasm and entertaining prose. Even if the facts around us are ever changing, the lessons and fun in this book will have a very long half-life!”
—Michael J. Mauboussin, chief investment strategist, Legg Mason Capital Management, and author of The Success Equation

“The Half-life of Facts teaches you that it is possible, in fact, to drink from a fire­hose. Samuel Arbesman, an extremely creative scientist and storyteller, explores the paradox that knowledge is tentative in particularly consistent ways. In his ca­pable hands, we learn about everything from how medieval manuscripts resemble genetic code to what bacteria and computer chips have in common. This book un­ravels the mystery of how we come to know the truth—and how long we can be certain about it.”
—Nicholas A. Christakis, MD, PhD, coauthor of Connected

“Facts fall apart, some famously so. Brontosaurus is not a real dinosaur species; Pluto is not a planet. When you look at them en masse, patterns emerge: Facts die, and are born, at specific, predictable rates. These rates are the subject of applied mathematician Samuel Arbesman’s engaging, insightful jaunt across the backstage of scientific knowledge. Packed with interesting tidbits—for instance, more than a third of mammals thought to have gone extinct in the last 500 years have since reappeared—the book explains how facts spread and change over time. It also explores how today’s data-soaked reality has yielded high-throughput, automated ways to produce new truths, like algorithms that discover connections between genes and disease.”
—Veronique Greenwood, Discover magazine

“Knowledge shifts over time, explains Sam Arbesman in The Half-Life of Facts, and it does so in predictable ways. The book takes us on a whirlwind tour of emerging fields of scientometrics, and undertakes a broader exploration of metaknowledge. Arbesman details how researchers beginning to focus the big-data lens back on science itself are uncovering quantitative laws and regulari­ties in the way that scientific knowledge is constructed and modified over time….Arbesman is a delight­ful guide to the territory, patently in love with this emerging field. He is also a skilled storyteller, and his wide-eyed reporting invigorates material that could have been dry and academic.”
—Carl Bergstrom, Nature magazine

Samuel Arbesman is an applied mathematician and network scientist. He is a senior scholar at the Kauffman Foundation and a fellow at the Institute for Quantitative Social Science at Harvard University. His writing has appeared in "The New York Times," "The Atlantic," "Wired," "New Scientist," and "The Boston Globe." He lives in Kansas City with his wife.
Loading...
or
Not Currently Available for Direct Purchase