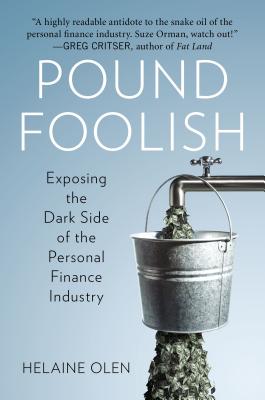 If you ve ever bought a personal finance book, watched a TV show about stock picking, listened to a radio show about getting out of debt, or attended a seminar to help you plan for your retirement, you ve probably heard some version of these quotes:

What's keeping you from being rich? In most cases, it is simply a lack of belief. SUZE ORMAN, "The Courage to Be Rich"

Are you latte-ing away your financial future? DAVID BACH, "Smart Women Finish Rich"

I know you re capable of picking winning stocks and holding on to them. JIM CRAMER, "Mad Money"

They re common refrains among personal finance gurus. There's just one problem: those and many similar statements are false.

For the past few decades, Americans have spent billions of dollars on personal finance products. As salaries have stagnated and companies have cut back on benefits, we ve taken matters into our own hands, embracing the can-do attitude that if we re smart enough, we can overcome even daunting financial obstacles. But that's not true.

In this meticulously reported and shocking book, journalist and former financial columnist Helaine Olen goes behind the curtain of the personal finance industry to expose the myths, contradictions, and outright lies it has perpetuated. She shows how an industry that started as a response to the Great Depression morphed into a behemoth that thrives by selling us products and services that offer little if any help.

Olen calls out some of the biggest names in the business, revealing how even the most respected gurus have engaged in dubious, even deceitful, practices from accepting payments from banks and corporations in exchange for promoting certain products to blaming the victims of economic catastrophe for their own financial misfortune. "Pound Foolish "also disproves many myths about spending and saving, including: Small pleasures can bankrupt you: Gurus popularized the idea that cutting out lattes and other small expenditures could make us millionaires. But reducing our caffeine consumption will not offset our biggest expenses: housing, education, health care, and retirement. Disciplined investing will make you rich: Gurus also love to show how steady investing can turn modest savings into a huge nest egg at retirement. But these calculations assume a healthy market and a lifetime without any setbacks two conditions that have no connection to the real world. Women need extra help managing money: Product pushers often target women, whose alleged financial ignorance supposedly leaves them especially at risk. In reality, women and men are both terrible at handling finances. Financial literacy classes will prevent future economic crises: Experts like to claim mandatory sessions on personal finance in school will cure many of our money ills. Not only is there little evidence this is true, the entire movement is largely funded and promoted by the financial services sector.

Weaving together original reporting, interviews with experts, and studies from disciplines ranging from behavioral economics to retirement planning, "Pound Foolish "is a compassionate and compelling book that will change the way we think and talk about our money.


Praise For Pound Foolish: Exposing the Dark Side of the Personal Finance Industry…

“It's rare to come across a realistic and readable book about personal finance. Most are laden with rosy promises, followed by acronyms and turgid advice. Helaine Olen, a freelance journalist, offers an exception with Pound Foolish.... It’s a take-no-prisoners examination of the ways she says we have been scared, misled or bamboozled by those purporting to help us achieve financial security.”
—The New York Times

“Have you ever met anyone who has grown rich just by saving? Probably not. But you may well have met someone who has grown rich looking after other people’s savings. That dark secret lies at the heart of ‘Pound Foolish’, Helaine Olen’s excellent book, a contemptuous exposé of the American personal-finance industry.”
—The Economist

“A cautionary tale that you need to read.”
—The Washington Post

“Dishy dirt on the ‘financialization’ of American life and the hordes of carrion-pickers who swarm us in the hope of lifting still more dollars from our pockets.”
—Kirkus

“This thought-provoking book alerts us to important issues in today’s post-recession economy.”
—Booklist

“A highly readable antidote to the snake oil of the personal finance industry. Suze Orman, watch out!” —GREG CRITSER, author of Fat Land   “Wow, does personal financial advice need debunking. And Helaine Olen does it like an old master. Clear, witty, takes no prisoners, and right as hell. Olen will wake you up. There is no financial trick to make you rich.” —JEFF MADRICK, author of The Age of Greed and senior fellow at the Roosevelt Institute   “Helaine Olen explains in simple language why most Americans are never going to understand the myriad complexities of investing and borrowing, leaving us all vulnerable to being ripped off in oh so many ways. Combining thorough research with passionate writing, Pound Foolish tells us what to do to protect ourselves and our hard-earned money.” —DAVID CAY JOHNSTON, Pulitzer Prize–winning author of The Fine Print   “As Helaine Olen shows in this powerful exposé, ‘personal finance’ is the ultimate oxymoron. The financial challenges that most Americans face are not simply personal—they reflect the failure of our polices and our leaders to tackle growing middle-class insecurity. And the advice that self-proclaimed money experts provide is far from sound finance. Too often, it’s snake oil that only adds to the problem.” —JACOB S. HACKER, director of the Institution for Social and Policy Studies, Yale University, and author of The Great Risk Shift   “Pound Foolish is a fabulously well-reported, lucid, and witty tour of the train wreck that American finance has become. Olen has the rare ability to demystify the countless swindles and frauds that lately comprise the basic operations of the investment scene. As a kind of bonus, she depicts with verve and intelligence the panoramic freak show of personalities who infest the money scene.” —JAMES HOWARD KUNSTLER, author of The Geography of Nowhere and Too Much Magic   “In this gripping account, Helaine Olen pulls out the rug from under the finance industry, and does so in time for at least some of us to find alternative solutions to financial security.” —DOUGLAS RUSHKOFF, author of Life Inc. and Present Shock   “The world of personal finance is an economic sideshow filled with illusionists, conjurers, and snake-oil salesmen of every stripe. Thankfully, Helaine Olen has spent enough time inside the circus to be able to guide us wisely and wittily through the hall of mirrors—and come out smarter on the other end.” —JAMES LEDBETTER, opinion editor, Reuters, and author of Unwarranted Influence   “The cult of ‘personal finance’ sells itself—and preys on pocketbooks—with a wildly false message: that American middle class families only have themselves to blame for their economic troubles. With wit, simple math, and relentless sleuthing, Helaine Olen shows how the personal finance industry has led savers and investors astray, and what you can do to avoid its traps.” —ALYSSA KATZ, author of Our Lot

HELAINE OLEN is a freelance journalist whose work has appeared in "The New York Times, The Washington Post, Slate, Salon, Forbes, BusinessWeek, "and elsewhere. She wrote and edited the popular Money Makeover series in the "Los Angeles Times." She lives in New York City with her family. Follow her on Twitter at @helaineolen."