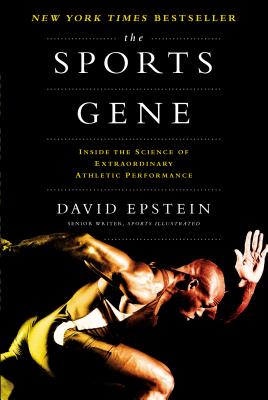 The New York Times bestseller – with a new afterword added to the paperback – from the author of Range: Why Generalists Triumph in a Specialized World.

In high school, I wondered whether the Jamaican Americans who made our track team so successful might carry some special speed gene from their tiny island. In college, I ran against Kenyans, and wondered whether endurance genes might have traveled with them from East Africa. At the same time, I began to notice that a training group on my team could consist of five men who run next to one another, stride for stride, day after day, and nonetheless turn out five entirely different runners. How could this be?

We all knew a star athlete in high school. The one who made it look so easy. He was the starting quarterback and shortstop; she was the all-state point guard and high-jumper. Naturals. Or were they?

The debate is as old as physical competition. Are stars like Usain Bolt, Michael Phelps, and Serena Williams genetic freaks put on Earth to dominate their respective sports? Or are they simply normal people who overcame their biological limits through sheer force of will and obsessive training?
The truth is far messier than a simple dichotomy between nature and nurture. In the decade since the sequencing of the human genome, researchers have slowly begun to uncover how the relationship between biological endowments and a competitor’s training environment affects athleticism. Sports scientists have gradually entered the era of modern genetic research.

In this controversial and engaging exploration of athletic success, Sports Illustrated senior writer David Epstein tackles the great nature vs. nurture debate and traces how far science has come in solving this great riddle. He investigates the so-called 10,000-hour rule to uncover whether rigorous and consistent practice from a young age is the only route to athletic excellence.

Along the way, Epstein dispels many of our perceptions about why top athletes excel. He shows why some skills that we assume are innate, like the bullet-fast reactions of a baseball or cricket batter, are not, and why other characteristics that we assume are entirely voluntary, like an athlete’s will to train, might in fact have important genetic components.

This subject necessarily involves digging deep into sensitive topics like race and gender. Epstein explores controversial questions such as:

•  Are black athletes genetically predetermined to dominate both sprinting and distance running, and are their abilities influenced by Africa’s geography?
•  Are there genetic reasons to separate male and female athletes in competition?
•  Should we test the genes of young children to determine if they are destined for stardom?
•  Can genetic testing determine who is at risk of injury, brain damage, or even death on the field?
Through on-the-ground reporting from below the equator and above the Arctic Circle, revealing conversations with leading scientists and Olympic champions, and interviews with athletes who have rare genetic mutations or physical traits, Epstein forces us to rethink the very nature of athleticism.

Praise For The Sports Gene: Inside the Science of Extraordinary Athletic Performance…

“I can’t remember a book that has fascinated, educated—and provoked—me as much as The Sports Gene. Epstein has changed forever the way we measure elite athletes and their achievements.”
—Malcom Gladwell

“Many researchers and writers are reluctant to tackle genetic issues because they fear the quicksand of racial and ethnic stereotyping. To his credit, Epstein does not flinch.”
—The Washington Post

“Epstein’s rigour in seeking answers and insights is as impressive as the air miles he must have accumulated . . . his book is dazzling and illuminating.”
—The Guardian

“The narrative follows Mr. Epstein’s search for the roots of elite sport performance as he encounters characters and stories so engrossing that readers may not realize they’re receiving an advanced course in genetics, physiology, and sports medicine.”
—Christie Aschwanden, The New York Times

“An important book . . . The Sports Gene is bound to put the cat among the pigeons in the blank-slate crowd who think that we can all be equal as long as we equalize environmental inputs such as practice.”
—Michael Shermer, The Wall Street Journal

“This is the book I’ve been waiting for since the early 1960s. I can’t imagine that anyone interested in sports—particularly the fascinating question, ‘How do the best athletes become the best?’—will be any less enthralled than I.”
—Amby Burfoot, (1968 Boston Marathon Champion), Runner's World

“A must-read for athletes, parents, coaches, and anyone who wants to know what it takes to be great.”
—George Dohrmann, author of Play Their Hearts Out

David Epstein has a master’s degree in environmental science and is an award-winning senior writer for Sports Illustrated, where he covers sports science, medicine, and Olympic sports. His investigative pieces are among Sports Illustrated's most high-profile stories. An avid runner himself, he earned All-East honors on Columbia University's varsity track squad. This is his first book. He lives in Brooklyn.

For more information visit http://thesportsgene.com.
Loading...
or
Not Currently Available for Direct Purchase