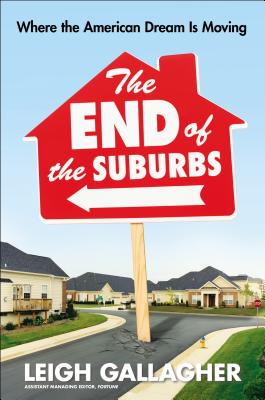 The End of the Suburbs (Hardcover)

Where the American Dream Is Moving

The government in the past created one American Dream at the expense of almost all others: the dream of a house, a lawn, a picket fence, two children, and a car. But there is no single American Dream anymore.
For nearly 70 years, the suburbs were as American as apple pie. As the middle class ballooned and single-family homes and cars became more affordable, we flocked to pre-fabricated communities in the suburbs, a place where open air and solitude offered a retreat from our dense, polluted cities. Before long, success became synonymous with a private home in a bedroom community complete with a yard, a two-car garage and a commute to the office, and subdivisions quickly blanketed our landscape.
But in recent years things have started to change. An epic housing crisis revealed existing problems with this unique pattern of development, while the steady pull of long-simmering economic, societal and demographic forces has culminated in a Perfect Storm that has led to a profound shift in the way we desire to live.
In "The End of the Suburbs" journalist Leigh Gallagher traces the rise and fall of American suburbia from the stately railroad suburbs that sprung up outside American cities in the 19th and early 20th centuries to current-day sprawling exurbs where residents spend as much as four hours each day commuting. Along the way she shows why suburbia was unsustainable from the start and explores the hundreds of new, alternative communities that are springing up around the country and promise to reshape our way of life for the better.
Not all suburbs are going to vanish, of course, but Gallagher's research and reporting show the trends are undeniable. Consider some of the forces at work: The nuclear family is no more: Our marriage and birth rates are steadily declining, while the single-person households are on the rise. Thus, the good schools and family-friendly lifestyle the suburbs promised are increasingly unnecessary.We want out of our cars As the price of oil continues to rise, the hours long commutes forced on us by sprawl have become unaffordable for many. Meanwhile, today's younger generation has expressed a perplexing indifference toward cars and driving. Both shifts have fueled demand for denser, pedestrian-friendly communities.Cities are booming. Once abandoned by the wealthy, cities are experiencing a renaissance, especially among younger generations and families with young children. At the same time, suburbs across the country have had to confront never-before-seen rates of poverty and crime.Blending powerful data with vivid on the ground reporting, Gallagher introduces us to a fascinating cast of characters, including the charismatic leader of the anti-sprawl movement; a mild-mannered Minnesotan who quit his job to convince the world that the suburbs are a financial Ponzi scheme; and the disaffected residents of suburbia, like the teacher whose punishing commute entailed leaving home at 4 a.m. and sleeping under her desk in her classroom.
Along the way, she explains why understanding the shifts taking place is imperative to any discussion about the future of our housing landscape and of our society itself and why that future will bring us stronger, healthier, happier and more diverse communities for everyone.

LEIGH GALLAGHER is an assistant managing editor at "Fortune," where she edits feature stories and oversees several "Fortune" franchises. She is a regular guest on MSNBC s "Morning Joe" and public radio s "Marketplace," appears frequently on CNN, CNBC and other outlets, and is a frequent public speaker. Earlier in her career she was a senior editor at "SmartMoney" magazine and a writer for "Forbes." This is her first book."

Praise For The End of the Suburbs: Where the American Dream Is Moving…

“This book is a steel fist in a velvet glove. Beneath Leigh Gallagher's smooth, elegant prose there is a methodical smashing of the suburban paradigm. When all is done, a few shards remain—but only because she is scrupulously fair. This story of rise and ruin avoids the usual storm of statistics—nor is it a tale told with apocalyptic glee. The End of the Suburbs is the most convincing book yet on the lifestyle changes coming to our immediate future.”
— Andres Duany, founding partner of Duany Plater-Zyberk & Company and co-author of Suburban Nation

“The book is loaded with fascinating detail wrapped in a vivid story Gallagher creates from behind the scenes of America’s greatest promotion: the suburbs.”
—Meredith Whitney, author, Fate of the States: The New Geography of American Prosperity and founder, Meredith Whitney Advisory Group

“Leigh Gallagher asks all the right questions and comes up with surprising conclusions in this sweeping discussion of the future of the suburb. Spoiler alert - it's a bleak future for the burbs, but don't panic: Gallagher foretells a new world order where the conveniences  of the urban lifestyle rewire our understanding of the American Dream. You'll never look at a cul-de-sac the same way again after you enjoy this book, which is simultaneously entertaining and informative, breezy and analytical.”
—Spencer Rascoff, CEO, Zillow

“The End of the Suburbs is a compelling, insightful must-read on what author Leigh Gallagher calls the ‘slow-burning revolution’ re-mapping the shape of America and its future. Her masterfully-argued case springs to life with both impressive research and empathetic portraits of those seduced and often betrayed by suburbia's promise of a more livable life. Now, where's my moving truck? Oh, right. Stuck in commuter traffic.”
—Linda Keenan, author and resident of Suburgatory

“No one knows how American residential preferences will change in the 21st century. But Leigh Gallagher’s well-researched and provocative The End of the Suburbs makes a persuasive argument that is difficult to refute. Required reading for anyone interested in the future of the United States.”
—Kenneth T. Jackson, professor of history, Columbia University and author of the prize-winning Crabgrass Frontier: The Suburbanization of the United States

“I couldn’t put this book down. My readers often ask me, ‘What will happen to suburbia once we’ve all right-sized our homes and communities?’ Leigh Gallagher provides the data that I’ve been looking for, and makes the powerful assertion that our suburbs are permanently changing, not because of the Great Recession, but because of new attitudes about where and how we want to live—which is great news, both for the near term, and for generations to come.”
—Sarah Susanka, the author of The Not So Big House series, and The Not So Big Life: Making Room for What Really Matters.

"The end of Suburbia is timely and important. We should hope it is prophetic, because Leigh Gallagher shows suburbs as we know them are unsafe for our species."
—Eric Klinenberg, Professor of Sociology at New York University and author of Going Solo: The Extraordinary Rise and Surprising Appeal of Living Alone

"Through compelling expert interviews, data and trends analysis, Leigh affirms the notion that we've hit 'peak burb.' This book presents a strong case for America's increasing preference for higher density lifestyles and the resulting trend to manage our lives via the information highway, not the paved kind!"
—Scott W. Griffith, former chairman and CEO, Zipcar   "Have you ever wondered whether the Great Recession will halt the process of gentrification in major American cities? Or what will happen to the empty suburban sprawl that is the result of the housing boom and bust? Or how most of us will live in a world where oil is expensive? Leigh Gallagher's crisp, entertaining, and fact-filled new book answers these questions and many more."
—Bethany McLean, coauthor, The Smartest Guys in the Room and All the Devils are Here: The Hidden History of the Financial Crisis