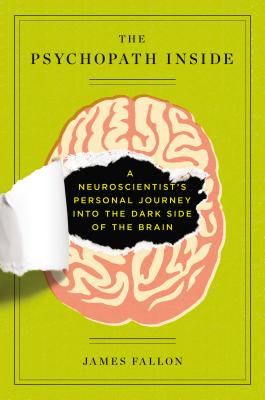 The Psychopath Inside (Hardcover)

A Neuroscientist's Personal Journey Into the Dark Side of the Brain

-The last scan in the pile was strikingly odd. In fact it looked exactly like the most abnormal of the scans I had just been writing about, suggesting that the poor individual it belonged to was a psychopath--or at least shared an uncomfortable amount of traits with one....When I found out who the scan belonged to, I had to believe there was a mistake....But there had been no mistake. The scan was mine.-
For the first fifty-eight years of his life James Fallon was by all appearances a normal guy. A successful neuroscientist and medical school professor, he'd been raised in a loving, supportive family, married his high school sweetheart, and had three kids and lots of friends.

Then he learned a shocking truth that would not only disrupt his personal and professional life, but would lead him to question the very nature of his own identity.

The Psychopath Inside tells the fascinating story of Fallon's reaction to the discovery that he has the brain of a psychopath. While researching serial murderers, he uncovered a distinct neurological pattern in their brain scans that helped explain their cold and violent behavior. A few months later he learned that he was descended from a family with a long line of murderers which confirmed that Fallon's own brain pattern wasn't a fluke.

As a scientist convinced that humans are shaped by their genetics, Fallon set out to reconcile the truth about his brain with everything he knew about the mind, behavior, and the influence of nature vs. nurture on our personalities. How could he, a successful scientist and a happy family man with no history of violence, be a psychopath? How much did his biology influence his behavior? Was he capable of some of the gruesome atrocities perpetrated by the serial killers he had studied?

Combining his personal experience with scientific analysis, Fallon shares his journey and the discoveries that ultimately led him to understand that, despite everything science can teach us, humans are even more complex than we can imagine.

James Fallon is an award-winning neuroscientist at the University of California, Irvine, where he has taught neuroscience to medical students, graduate students, and clinicians in psychiatry and neurology for thirty-five years. His start-up company, NeuroRepair, was voted top new biotech firm of the year by a national association of its peers and has engineered major breakthroughs in stem-cell research. He has been married to his wife for forty-four years and has three children.

Praise For The Psychopath Inside: A Neuroscientist's Personal Journey Into the Dark Side of the Brain…

“The Psychopath Inside is a deeply compelling personal story of an eminent scien­tist’s discovery of his own psychopathy. Jim Fallon confesses the sins of his biology and in doing so receives the absolution of being human. I couldn’t put it down.”
—PAUL J. ZAK, PhD, author of The Moral Molecule: The Source of Love and Prosperity

“As comprehensive as it is compelling, essential reading for understanding the genetic and neuroscience underpinnings of psychopathy.”
—M. E. THOMAS, author of Confessions of a Sociopath

“Just the word ‘psychopath’ is enough to grab anyone’s attention and it has inspired numerous TV shows and films for many decades. In truth, I believe the word itself does little to wrap its arms around the infinite behavioral traits psychopaths pos­sess, for good and bad. Fallon lets us inside his mind as he takes us on a deftly woven journey, breaking down every convention of psychopathic behavior.”
—SIMON MIRREN, former executive producer of Criminal Minds

“In a thought-provoking account of self-exploration, Fallon puts himself ‘under the microscope’ in an attempt to make sense of how his own biological and developmental history has shaped his life. His perspective on psychopathy pushes us to consider the important roles of nature and nurture, and the fine line between adaptive and mal­adaptive personality traits.”
—JOHN F. EDENS, PhD, professor of psychology, director of clinical training, and Cornerstone Faculty Fellow, College of Liberal Arts, Texas A&M University

"An intriguing look into the dark side of the brain. A must-read for anyone curious about why our brains think our darkest thoughts and how many of us go into states of psychosis without even realizing it. Dr. Fallon's study of my own brain helped me come to terms with my strangest ideas and why I function the way I do.  Few people understand the brain as well as Dr. Fallon, and can write about it in such a fun and engaging way.  A fascinating read."
—ELI ROTH, writer, director, and producer

“His surprising final diagnosis could broaden the way we see normality.”
–Nature journal