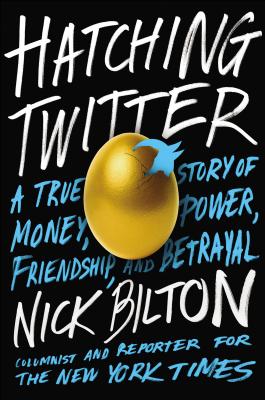 A True Story of Money, Power, Friendship, and Betrayal

A"New York Times"bestseller
Ev told Jack he had to chill out with thedeluge of media he was doing. It's badfor the company, Ev said. It's sendingthe wrong message. Biz sat betweenthem, watching like a spectator at a tennismatch.

No, you didn t invent Twitter, Ev replied. I didn t invent Twitter either. Neither didBiz. People don t invent things on theInternet. They simply expand on an ideathat already exists.
In 2005, Odeo was a struggling podcasting start-upfounded by free-range hacker Noah Glass and staffedby a motley crew of anarchists. Less than two yearslater, its days were numbered and half the staff hadbeen let go. But out of Odeo's ashes, the remainingemployees worked on a little side venture . . . that by2013 had become an $11.5 billion business.

That much is widely known. But the full story ofTwitter's hatching has never been told before. It's adrama of betrayed friendships and high-stakes powerstruggles, as the founders went from everyday engineersto wealthy celebrities featured on magazinecovers, "The Oprah Winfrey Show," " The Daily Show," and "Time"'s list of the world's most influential people.

"New York Times" columnist and reporter Nick Biltontakes readers behind the scenes as Twitter grewat exponential speeds. He gets inside the heads ofthe four hackers out of whom the company tumbled:

Evan Ev Williams, the ambitious farm boy fromClarks, Nebraska, who had already created Bloggerand sold it to Google for millions. Quiet andprotective, Ev is a shrewd businessman who madetough choices in the interest of his companies, firingcofounders and employees who were once friends.

Jack Dorsey, the tattooed nobody who helpedmastermind the original concept of Twitter, becamea billionaire tech titan, and convinced the media thathe was the next Steve Jobs.
Christopher Biz Stone, the joker and diplomatwho played nice with everyone. As drama ensued, he was the only founder who remained on goodterms with his friends and to this day has no enduringresentments.

Noah Glass, the shy but energetic geek who investedhis whole life in Twitter, only to be kicked out andexpunged from the company's official history.
As Twitter grew, the four founders fought bitterly formoney, influence, publicity, and control over a companythat grows larger and more powerful by the day.Ultimately they all lost their grip on it. Today, none ofthem is the CEO. Dick Costolo, a fifty-year-old formercomedian, runs the company.

By 2013 Twitter boasted close to 300 millionactive users around the world. In barely six years, the service has become a tool for fighting politicaloppression in the Middle East, a marketing musthavefor business, and the world's living room duringlive TV events. Today, notables such as the pope, Oprah Winfrey, and the president of the United Statesare regular Twitter users. A seventeen-year-old with amobile phone can now reach a larger audience thanan entire crew at CNN.

Bilton's unprecedented access and exhaustiveinvestigating reporting drawing on hundreds ofsources, documents, and internal e-mails haveenabled him to write an intimate portrait of fourfriends who accidentally changed the world, andwhat they all learned along the way.


Praise For Hatching Twitter: A True Story of Money, Power, Friendship, and Betrayal…

"A compelling read, more like espionage than a corporate history."
--Fortune Magazine

"A dramatic and detail-rich recounting."
--Cnet

"Goes where no book has gone before."
--The Huffington Post

Nick Biltonis a columnist and reporter forThe New York Times, where he explores the disruptive aspects of technology on business, culture and society. His columns span everything from the future of technology and privacy to the impact of social media on the Web. He is a regular guest on national TV and radio and is the author ofI Live in the Future & Here s How It Works. He lives in Los Angeles."
Loading...
or
Not Currently Available for Direct Purchase