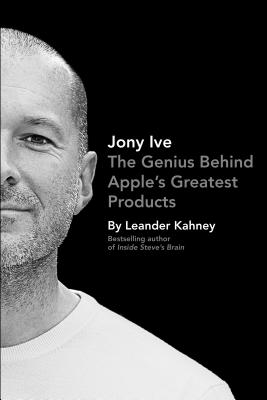 The Genius Behind Apple's Greatest Products

Different and new is relativelyeasy. Doing something that sgenuinely better is very hard. Jony Ive

In 1997, Steve Jobs returned to Apple as CEO with the unenviable task of turning around the company he had founded. One night, Jobs discovered a scruffy British designer toiling away at Apple's corporate headquarters, surrounded by hundreds of sketches and prototypes. It was then that Jobs realized he had found a talent who could reverse the company's long decline.

That young designer was Jony Ive.
Jony Ive's collaboration with Jobs would producesome of the world's most iconic technology products, including the iMac, iPod, iPad, and iPhone. The designs have not only made Apple a hugely valuablecompany, they ve overturned entire industries, builta loyal fan base, and created a globally powerfulbrand. Along the way, Jony Ive has become theworld's leading technology innovator, won countless design awards, earned a place on the 2013 Time100 list, and was even knighted for his services todesign and enterprise.

Yet despite his triumphs, little is known about the shy and soft-spoken whiz whom Jobs referred toas his spiritual partner at Apple. Jony Ive revealsthe true story of Apple's real innovator-in-chief.

Leander Kahney, the bestselling author of InsideSteve's Brain, offers a detailed portrait of a creative genius. He shows us how Jony Ive went from anEnglish art school student with dyslexia to the manwhose immense insights have altered the patternof our lives. From his early interest in industrialdesign, fostered by his designer father, through his education at Newcastle Polytechnic and meteoric rise at Apple, we discover the principles and practices that he developed to become the designer of his generation.

Based on interviews with Jony Ive's former colleagues and Kahney's own familiarity with the world of Apple, this book gives insight into how Jony Ive (now senior vice president of design) has redefined the ways in which we work, entertain, and communicate with one another.

Leander Kahney has covered Apple for more than a dozen years and has written three popular books about Apple, including Inside Steve s Brainand Cult of Mac. The former news editor for Wired.com, he is currently the editor and publisher of CultofMac.com. He lives in San Francisco."

Praise For Jony Ive: The Genius Behind Apple's Greatest Products…