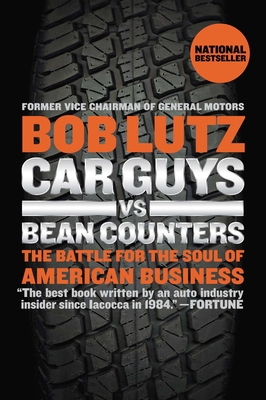 “One of the most acute books about management and how com­panies work in practice that I have read in a long time. If anyone wants to know exactly how the U.S. auto industry got into trou­ble, here is your guide.”
—John Gapper, FINANCIAL TIMES

When Bob Lutz got into the auto business in the early 1960s, CEOs knew that if you captured the public’s imagination with innovative car design and top-quality crafts­manship, the money would follow. The “car guys” held sway, and GM dominated with bold, creative leadership and iconic brands like Cadillac, Buick, Pontiac, Oldsmobile, GMC, and Chevrolet.

But then GM’s leadership began to put its faith in numbers and spreadsheets. Determined to eliminate the “waste” and “personality worship” of the bygone creative leaders, management got too smart for its own good. With the bean counters firmly in charge, carmakers, and much of American industry, lost their single-minded focus on product excellence and their competitive advantage. Decline soon followed.

In 2001, General Motors hired Lutz out of retirement with a mandate to save the company by making great cars again. As vice chairman, he launched a war against the penny-pinching number crunchers who ran the company by the bottom line and reinstated a focus on creativity, design, and cars and trucks that would satisfy GM’s customers.

Lutz’s commonsense lessons, combined with a generous helping of fascinating anecdotes, will inspire readers in any industry.

“This book should be required reading for every young person who seeks a business degree. That applies equally to the current management of GM.”

“This is exactly what you’d expect from Bob Lutz: no holds barred, no punches pulled, and no stone left unturned. It’s a true insider’s perspective and a great read.”

“Car Guys vs. Bean Counters is the best book written by an auto industry insider since Iacocca in 1984, and deserves to be shelved alongside Alfred P. Sloan’s management classic, My Years with General Motors.”

BOB LUTZ held senior leadership positions at Gm, ford, Chrysler, and BMW over the course of an unparalleled forty-seven-year career, culminating in his vice chairmanship of General motors from 2001 to 2010. He is the bestselling author of Guts: 8 Laws of Business from One of the Most Innovative Business Leaders of Our Time.
Loading...
or
Not Currently Available for Direct Purchase