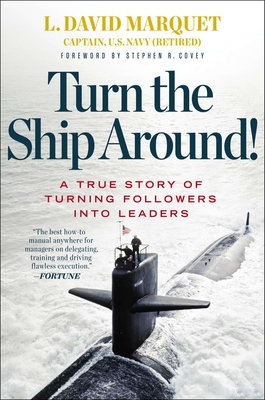 A True Story of Turning Followers into Leaders

“One of the 12 best business books of all time…. Timeless principles of empowering leadership.” – USA Today

Since Turn the Ship Around! was published in 2013, hundreds of thousands of readers have been inspired by former Navy captain David Marquet’s true story. Many have applied his insights to their own organizations, creating workplaces where everyone takes responsibility for his or her actions, where followers grow to become leaders, and where happier teams drive dramatically better results.

Marquet was a Naval Academy graduate and an experienced officer when selected for submarine command. Trained to give orders in the traditional model of “know all–tell all” leadership, he faced a new wrinkle when he was shifted to the Santa Fe, a nuclear-powered submarine. Facing the high-stress environment of a sub where there’s little margin for error, he was determined to reverse the trends he found on the Santa Fe: poor morale, poor performance, and the worst retention rate in the fleet.

Almost immediately, Marquet ran into trouble when he unknowingly gave an impossible order, and his crew tried to follow it anyway. When he asked why, the answer was: “Because you told me to.” Marquet realized that while he had been trained for a different submarine, his crew had been trained to do what they were told—a deadly combination.

That’s when Marquet flipped the leadership model on its head and pushed for leadership at every level. Turn the Ship Around! reveals how the Santa Fe skyrocketed from worst to first in the fleet by challenging the U.S. Navy’s traditional leader-follower approach. Struggling against his own instincts to take control, he instead achieved the vastly more powerful model of giving control to his subordinates, and creating leaders.

Before long, each member of Marquet’s crew became a leader and assumed responsibility for everything he did, from clerical tasks to crucial combat decisions. The crew became completely engaged, contributing their full intellectual capacity every day. The Santa Fe set records for performance, morale, and retention. And over the next decade, a highly disproportionate number of the officers of the Santa Fe were selected to become submarine commanders.

Whether you need a major change of course or just a tweak of the rudder, you can apply Marquet’s methods to turn your own ship around.

Praise For Turn the Ship Around!: A True Story of Turning Followers into Leaders…

"Captain Marquet's compelling leadership journey inspires each of us to imagine a world where every human being is intellectually engaged and fully committed to solving our toughest challenges. If it can be done on a nuclear submarine, it can be done everywhere. Turn the Ship Around! delivers a brilliant message." -- Liz Wiseman, Author of Multipliers: How the Best Leaders Make Everyone Smarter

L. David Marquet, a top graduate of the U.S. Naval Academy, commanded the nuclear-powered, fast-attack submarine USS Santa Fe from 1999 to 2001. Since retiring from the Navy he has worked with businesses nationwide as a leadership consultant.  He gives presentations around the world and has also written a companion workbook called Turn Your Ship Around.  He lives in Florida with his wife, Jane.
Loading...
or support indie stores by buying on