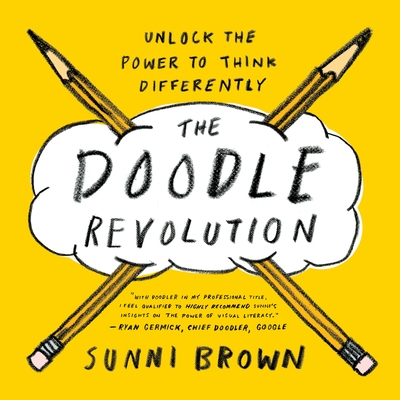 Unlock the Power to Think Differently

There is NO SUCH THING as a mindless doodle

What did Einstein, JFK, Edison, Marie Curie, and Henry Ford have in common? They were all inveterate doodlers. These powerhouse minds knew instinctively that doodling is deep thinking in disguise-a simple, accessible, and dynamite tool for innovating and solving even the stickiest problems.

Sunni Brown's mission is to bring the power of the Doodle to the rest of us. She leads the Revolution defying all those parents, teachers, and bosses who say Stop doodling! Get serious! Grow up! She overturns misinformation about doodling, demystifies visual thinking, and shows us the power of applying our innate visual literacy. She'll teach you how to doodle any object, concept, or system imaginable, shift habitual thinking patterns, and transform boring text into displays that can engage any audience.

Sunni Brown was named one of the "100 Most Creative People in Business" and one of the "10 Most Creative People on Twitter" by Fast Company. She is founder of a creative consultancy, an international speaker, the co-author of Gamestorming, and the leader of a global campaign for visual literacy called The Doodle Revolution. Her TED Talk on doodling has drawn more than a million views on TED.com. Her work on visual literacy and gaming has been featured in over 35 nationally-syndicated news programs and reported on in The Wall Street Journal, CNN.com, the BBC, Fast Company, Inc. Magazine, etc. She lives in Keep Austin Weird, Texas.

Praise For The Doodle Revolution: Unlock the Power to Think Differently…

“In The Doodle Revolution, Sunni Brown opens our minds to the idea that we naturally possess a simple, overlooked skill of great value: the ability to doodle. It's a rare gift to be taught such a rewarding truth in so joyful and light-hearted a manner. Sunni is a creative light and an inspiring mentor.”
—Chris Anderson, TED Curator

"Why do we insist on representing our world using 26 letters rather than an infinity of pictures? Sunni Brown shows us how to doodle our way to better thinking. Her book will have you drawing insights on the page, not just in the margins."
—Dan Heath, co-author of Decisive, Made to Stick, and Switch

"Contrary to popular opinion, doodling is a serious endeavor. As Brown shows in this smart and accessible book, applying visual language allows you to see new dimensions of a problem -- and at times, new aspects of yourself.  So get out your writing sticks and prepare to doodle!"
—Daniel H. Pink, author of To Sell is Human and Drive

“The future is filled with an ever-growing density of information, so visual literacy—the ability to think and communicate using visual language—will become an essential skill. Thankfully, The Doodle Revolution gives all of us the ability to take the leap.”
—Jane McGonigal, author of Reality Is Broken

"Doodles come straight from the Unconscious. That's partly why they work. Sunni did a beautiful job of shining a light on visual language."
—Steven Pressfield, author of The War of Art and The Legend of Bagger Vance

“There’s a reason why so many innovative companies use Sunni’s techniques for visual literacy, and it’s not just because they want to have fun. These methods offer consistently better thinking, and in the process deliver happiness as well.”

“Doodling is not just a nervous habit. It nudges the mind to discover different angles and hidden connections.  In the long run—and especially around new media—expressing oneself in raw text might not stand up in the face of artistic, spatial, and emotive text. Sunni has found a way to validate and systematize a new language that enables thinking on a whole new level.”
—Robert McKee, author of Story

“Both practical and inspiring, Brown’s book reminds readers of the revolutionary power o simplicity in an information-overloaded world. A gold mine for readers interested in learning more about the benefits of increased visual literacy.”
—Kirkus
"Brown's defense of the doodle is convincing . . . this creative, fun book will definitely help you get your doodle on."
-SUCCESS magazine
or
Buy Here
Copyright © 2020 American Booksellers Association