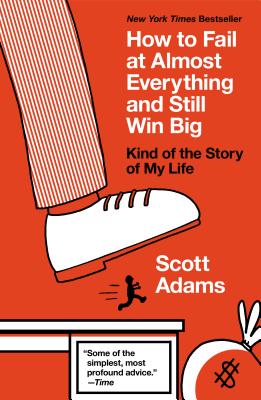 How to Fail at Almost Everything and Still Win Big

Praise For How to Fail at Almost Everything and Still Win Big: Kind of the Story of My Life…

“Adams has a funny, refreshingly considered set of ideas about how to find success—and what that success will look like when one gets there.”
—Kirkus Reviews

“Scott Adams has drawn nearly 9,000 Dilbert cartoons since the strip began, in 1989, and his cynical take on management ideas, the effectiveness of bosses, and cubicle life has affected the worldview of millions. But he built his successful career mainly through trial and error—a whole lot of error, to be exact.
—Harvard Business Review

Scott Adams is the creator of Dilbert, one of the most popular comic strips of the past quarter century. He has been a full-time cartoonist since 1995, after 16 years as a technology worker for companies like Crocker National Bank and Pacific Bell. His many bestsellers include The Dilbert Principle and Dogbert’s Top Secret Management Handbook. He lives outside of San Francisco.
Loading...
or support indie stores by buying on
(This book is on backorder)