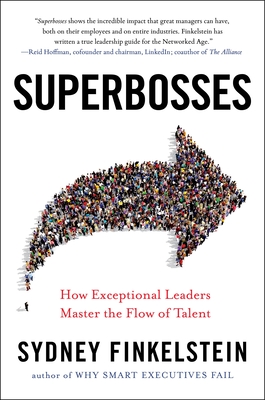 How Exceptional Leaders Master the Flow of Talent

"Superbosses is the rare business book that is chock full of new, useful, and often unexpected ideas. After you read Finkelstein's well-crafted gem, you will never go about leading, evaluating, and developing talent in quite the same way.”—Robert Sutton, author of Scaling Up Excellence and The No Asshole Rule

“Maybe you’re a decent boss. But are you a superboss? That’s the question you’ll be asking yourself after reading Sydney Finkelstein’s fascinating book. By revealing the secrets of superbosses from finance to fashion and from cooking to comic books, Finkelstein offers a smart, actionable playbook for anyone trying to become a better leader.”—Daniel H. Pink, author of To Sell Is Human and Drive

A fascinating exploration of the world’s most effective bosses—and how they motivate, inspire, and enable others to advance their companies and shape entire industries, by the author of How Smart Executives Fail. A must-read for anyone interested in leadership and building an enduring pipeline of talent.

What do football coach Bill Walsh, restauranteur Alice Waters, television executive Lorne Michaels, technol­ogy CEO Larry Ellison, and fashion pioneer Ralph Lauren have in common? On the surface, not much, other than consistent success in their fields. But below the surface, they share a common approach to finding, nurturing, leading, and even letting go of great people. The way they deal with talent makes them not merely success stories, not merely organization builders, but what Sydney Finkelstein calls superbosses.

After ten years of research and more than two hundred interviews, Finkelstein—an acclaimed professor at Dartmouth’s Tuck School of Business, speaker, and executive coach and consultant—discovered that superbosses exist in nearly every industry. If you study the top fifty leaders in any field, as many as one-third will have once worked for a superboss.

While superbosses differ in their personal styles, they all focus on identifying promising newcomers, inspiring their best work, and launching them into highly successful careers—while also expanding their own networks and building stronger companies. Among the practices that distinguish superbosses:

They Create Master-Apprentice Relationships.
Superbosses customize their coaching to what each protégé really needs, and also are constant founts of practical wisdom. Advertising legend Jay Chiat not only worked closely with each of his employees but would sometimes extend their discussions into the night.

They Rely on the Cohort Effect.
Superbosses strongly encourage collegiality even as they simultaneously drive internal competition. At Lorne Michaels’s Saturday Night Live, writers and performers are judged by how much of their material actually gets on the air, but they can’t get anything on the air without the support of their coworkers.

They Say Good-Bye on Good Terms.
Nobody likes it when great employees quit, but super­bosses don’t respond with anger or resentment. They know that former direct reports can become highly valuable members of their network, especially as they rise to major new roles elsewhere. Julian Robertson, the billionaire hedge fund manager, continued to work with and invest in his former employees who started their own funds.

By sharing the fascinating stories of superbosses and their protégés, Finkelstein explores a phenomenon that never had a name before. And he shows how each of us can emulate the best tactics of superbosses to create our own powerful networks of extraordinary talent.

Praise For Superbosses: How Exceptional Leaders Master the Flow of Talent…

“Superbosses shows the incredible impact that great managers can have, both on their employees and on entire industries.  As masters of career development, superbosses are both talent magnets and launchpads, remaining valued allies with their proteges long after their official relationships have ended.  Syd has written a true leadership guide for the Networked Age.”
—Reid Hoffman, Co-founder and Chairman of LinkedIn, Co-author of The Alliance

“I couldn’t agree more with Sydney Finkelstein that innovation is part of the leadership DNA. The best bosses—superbosses—must foster a culture of innovation, encourage smart risk taking, remove obstacles, and drive change. They demand world-class performance and empower their teams to achieve it. Superbosses gives leaders a playbook to bring out the best in their people.”
—Jeff Immelt, chairman and CEO, GE

"Superbosses is the rare business book that is chock full of new, useful, and often unexpected ideas.   After you read Finkelstein's well-crafted gem, you will never go about leading, evaluating, and developing talent in quite the same way.”
—Robert Sutton, author of Scaling Up Excellence and The No Asshole Rule

“First and foremost this is a book about leadership--how the best recruit, nurture and build teams of strong leaders. Consider it a beacon, written about  Superbosses who manage talent innovatively and achieve unrivaled success in their field--and written for those who want to excel and play at the top of their game.  Sydney Finkelstein has nailed it."
—General James Amos, USMC (Ret), 35th Commandant of the Marine Corps

“Superbosses is one of the most important, groundbreaking, and actionable leadership books to hit the market in years. Literally anyone who is seeking to have a positive impact on their organization and to achieve personal success as a natural consequence can apply the powerful yet straightforward concepts in the book starting immediately.  Sydney Finkelstein has done the hard work of proving, through deep research and analysis, and showing, through colorful stories and examples, that the way the best leaders succeed is by unleashing creativity, innovation, and motivation through their approaches to hiring and management. But here’s the best news – these lessons are teachable and directly applicable, whether you are a chief executive, a soccer coach, or an aspiring young professional. “
—James M. Citrin, Author, The Career Playbook and Leader, CEO Practice, Spencer Stuart

“Maybe you’re a decent boss. But are you a superboss? That’s the question you’ll be asking yourself after reading Sydney Finkelstein’s fascinating book. By revealing the secrets of superbosses from finance to fashion and from cooking to comic books, Finkelstein offers a smart, actionable playbook for anyone trying to become a better leader.”
—Daniel H. Pink, author of To Sell Is Human and Drive

“We have long recognised Sydney Finkelstein as one of the world’s leading management thinkers.  With Superbosses, he demonstrates why.  It is a riveting, inspiring and practical tour de force.”
—Stuart Crainer and Des Dearlove, founders, Thinkers50

“This book could make some bosses angry—and that's a good thing. Finkelstein’s examination of what actually makes a legendary leader goes against the grain of much standard management 'best practice' and offers a whole new way to think about talent.”
—Kevin Roberts, executive chairman, Saatchi & Saatchi Worldwide

“Complete with valuable information for managers and their subordinates, this volume provides great advice for the practice of management.”
—Library Journal

“Superbosses is that rare business book that does more than inform.  It’s positively hard to put down.”
—Success magazine

SYDNEY FINKELSTEIN is the Steven Roth Professor of Management at the Tuck School of Business at Dart­mouth College and the di­rector of Tuck’s Center for Leadership. He is a consultant and speaker to senior execu­tives around the globe, as well as an executive coach, focusing on talent development, corporate governance, learning from mistakes, and strategies for growth. He has published eight previous books, including the Wall Street Journal bestseller Why Smart Executives Fail. He is listed in Thinkers50, the world’s most prestigious ranking of leadership gurus.
Loading...
or
Not Currently Available for Direct Purchase